Daniel Berrigan was the priest at our wedding. He wouldn’t allow us to say “Dan Berrigan married us.” The one time I did, he quickly corrected me: “No, Jo. You married each other. I was only one of the witnesses.”

Dan was like that. Being a witness was important. He stood for responsibility. He believed in individuals being clear about what they were agreeing to, what they were signing up for. If you were an American citizen, for example, he thought it was essential that you know what your country was doing in your name. 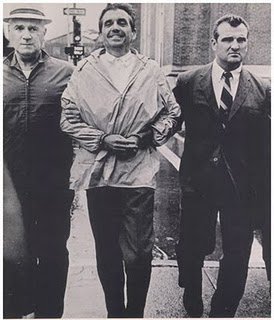 When he understood that America was killing Vietnamese children in his name, for example, he stood up and said no. Not in MY name.

Daniel Berrigan, Catholic priest, was arrested in 1968 for destroying records from the Catonsville, Maryland Draft Board – burning them before television cameras using homemade napalm.  It was a shocking and incredibly effective action. Nothing could have more clearly conveyed the abhorrence good people across the country felt at what their own government was doing in their name.

His stand cost him his freedom.

He was put on the FBI’s Most Wanted list,  hunted down and finally apprehended and imprisoned – peaceful and non-threatening to the end. I grew up in a home which revered him. He was one of our Household Saints, invoked in moments of crisis, referred to in times of trouble.

When Ravi and I asked him to officiate at our wedding, he agreed immediately. Neither of us knew him well at that point. But I think he appreciated the unlikeliness of our marriage (Hindu, Catholic, American, Indian, Brown, White, 32, 21) and decided to err (if erring it was) on the side of love.

At our wedding, he spoke about, when he was in jail, what a joy it always was for him and his fellow prisoners of conscience to hear about another young couple deciding to get married. Those were terrible times, he reminded us. The spectre of nuclear annihilation was always, always present and for the first time in history, images from a war overseas were appearing daily in American living rooms on the nightly news. People of his generation felt hopeless and confused and not at all sure that there was a future worth having or, indeed, whether there was a future at all. Hearing about young people willing to bet everything on love gave them courage. It gave them hope. “Who knows?, we thought. Maybe they’re crazy. But maybe they know something we don’t know.”

37 years later, Ravi and I are still here, still in love, still a little crazy, still a testament to what Dan Berrigan saw back in 1979, still trying hard to live out our version of his message.

In 1983, he baptized the first of our three children – our little boy: Anand Leary. 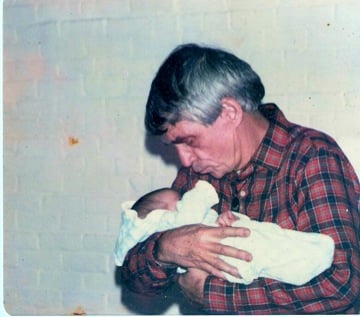 It doesn’t make sense in any worldly way. And yet, it endures.

Daniel Berrigan passed on into Heaven on April 30. He was 94 years old. In the last 30 years of his long, full life, he devoted himself not only to his vocation as an activist but also to his full-time ministry as a chaplain in a hospice for the dying. He understood, I believe, that it’s not enough simply to rail against evil. You have to add to what is good.

Dan did that in spades. And he left us with a memory of courage and witness, an example of how to live and over 30 books of stories, poems, plays and essays: a good man, a good life. We are blessed to have known him. ¡Presente¡ 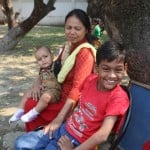 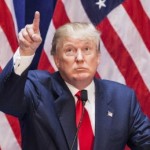