Cerebral palsy is a group of conditions characterized by particular types of movement and posture, caused by injuries to the brain that occur during fetal development or during the first few years of life when there is rapid brain development. Motor problems in CP are non-progressive – meaning that the original condition does not get worse. However, since contractures may develop as the child matures functionally this is of little comfort to the person or her family.

Cerebral palsy is caused by injury to the cerebrum (the largest portion of the brain, which is involved with higher mental faculties, sensations, and voluntary muscle activities). People with CP had lower levels of oxygen (hypoxia) to their brains at some point, but it is not known why this occurs.

It is thought that some babies may be more susceptible to any hypoxia that occurs during pregnancy, and this may be why some infants are affected while others can suffer similarly low oxygen levels but not have lasting brain damage. Premature babies are slightly more likely to have cerebral palsy. Cerebral palsy may also occur during infancy as a result of illnesses or head injuries. 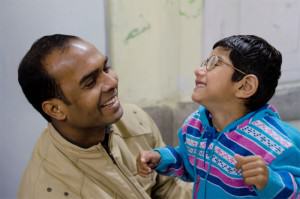 Injury to the cerebrum can result in the loss of nerve functions in widely different areas. The most common feature in cerebral palsy is spasticity (increased muscle tone), which may affect a single limb, one side of the body (spastic hemiplegia), both legs (spastic diplegia) and both arms and legs (spastic quadriplegia). In addition to this, there may be sensory abnormalities such as defects of hearing and vision. Speech difficulties are common and seizures may occur.

People with cerebral palsy may be extremely bright intellectually, or normal, or have a mental handicap as part of the condition.

It is usually possible to tell if a child has CP by the age of two and sometimes as early as a few months of age.

The words for CP are onomatopoeic: they sound like what they are describing – with lots of k’s and x’s and hard “c’s”: “dyskinetic: “spastic”, “ataxic”. Most of these terms describe movement peculiarities: the sudden twists and sharp gestures which people with cerebral palsy so often display.