Down Syndrome, commonly referred to as `Trisomy 21′ is a chromosomal condition in which there is generally an extra copy of the 21st chromosome. This syndrome usually, though not always, results in a person with friendly, sociable disposition, a mental handicap and other conditions.

Down Syndrome is a genetic condition that results in slower physical and intellectual development. It is one of the most common genetic conditions, affecting approximately 1 out of every 660 births, occurring irrespective of race, religion and socio-economic status. People with 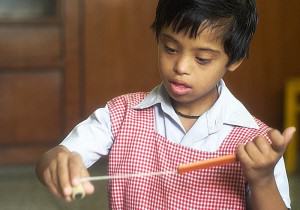 Down Syndrome have 47 chromosomes instead of the usual 46. Chromosomes are thread like structures composed of DNA and other proteins. They are present in every cell of the body and carry the genetic information needed for a cell to develop.

People with Down syndrome look remarkably similar, regardless of race or color. Their heads are often small and shaped slightly differently from people with 46 chromosomes. Their special facial features include almond-shaped eyes, a protruding tongue and a flattened nose. Their hands are usually small and broad with broad fingers and they are often short and stocky in build.

Signs of Down Syndrome: