Phew. Being a hero is hard work.

First, you have to do something significant for a long time (in our case, 17 years). Then you have to get discovered. And finally you have to be documented.

The first two were easy. After 17 years of working-working, you know a little about net-working.

It was the 3rd bit that took us by surprise. The documenting. We were selected as a CNN IBN Real Hero. The honor comes with a Five Lakh prize (that’s $10,000!). But also with a little movie being made about our work.

The film crew – Reena (the director, producer and anchor all rolled into one), Nishad and Gautam – descended upon us like an Immutable Law of Nature. 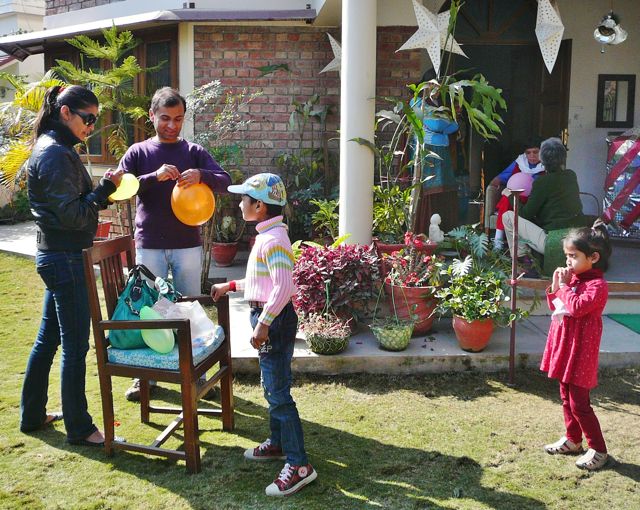 And at first, truth be told, it seemed like fun. There were balloons! Felt-tip pens! Beautiful children, dressed up in pretty clothes.

We all know, however, that reality is just a little kinkier than that.

Reena, for all her sweet smiles and charming manners, was as fierce as any Tiger Mom and just as ruthless and demanding.

Moy Moy, of course, is always and only herself. No amount of ordering or demanding made the slightest bit of difference and in the end, Reena got some amazing shots just by waiting around long enough. 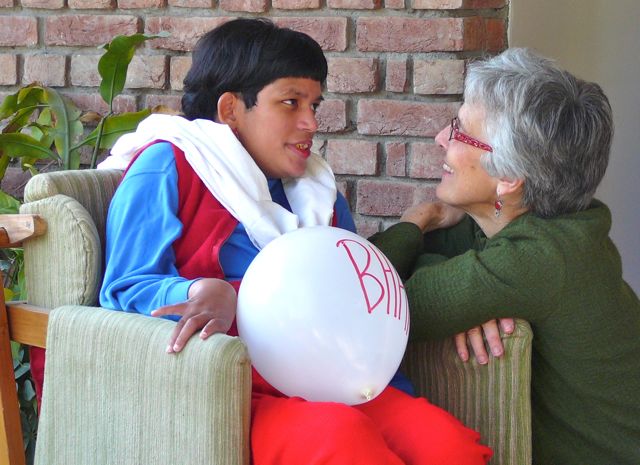 On Day One, I was expecting that we would only have a discussion about the plan. but I guess we just looked so good (HAHAHA) they couldn’t resist starting the shoot immediately. We were both wearing some old rags and I wasn’t too thrilled about it, but I figured we would wear our planned outfits the next day.

Moy Moy and I were then filmed relentlessly in our front garden. The soft evening light was perfect and all we had to do was what we had been doing anyway – leaf through photo albums. I thought – oh, this isn’t so difficult.

Suddenly, Reena decided we needed more trees. “Quick!” she exclaimed. “Is there a place we can go with a forest? We’ll have to move fast – while we still have the light.”

You try moving fast. Moy was in a wheelchair in the garden. She hadn’t had her milk yet and she needed to be changed. At lightening speed, I trundled her chair into the house, raced through those two small chores, then dashed out to the car and bundled her in to the front seat. Scooped up her stroller and hoisted it up onto the roof-rack. Sped off to FRI (luckily we keep a forest close at hand). Walked down the leafy lanes over and over and over,  trying not to go too fast or too slow, trying to remember not to glance directly into the camera, trying not to look too self-conscious.

Then a recce to all the centres where we would be shooting on Day Three (Day Two was Sunday). Then finally, home (where Reena informed me casually that we had to wear the same clothes – the old rags! – for the entire duration).

Day Two. The story Reena had concocted required a flashback to Moy Moy as a little girl – Lakshi won that part. After the dress she first arrived in (all pink and sparkling and covered with lace and sequins) was rejected and changed, Lakshi was put through her paces. 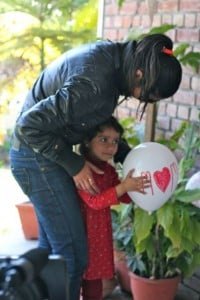 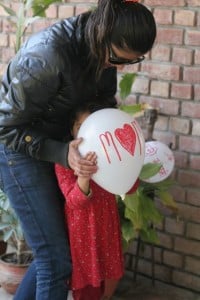 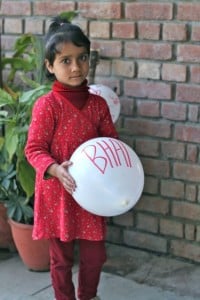 She tried gamely to understand the intricacies of correct balloon placement until finally, she simply and sweetly gave up. 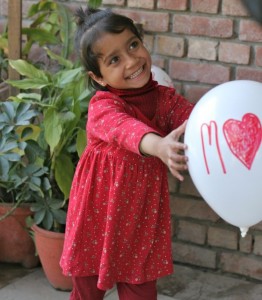 and Reena, conceding defeat, came up with another approach to her story.

But that was just Round One. Round Two, which she had every intention of winning, was out in the Mohand Forest, in a dry river bed. The idea was to portray the difficulties of Moy Moy’s early life and featured Lakshi, first perched on a tree branch, reciting a poem: 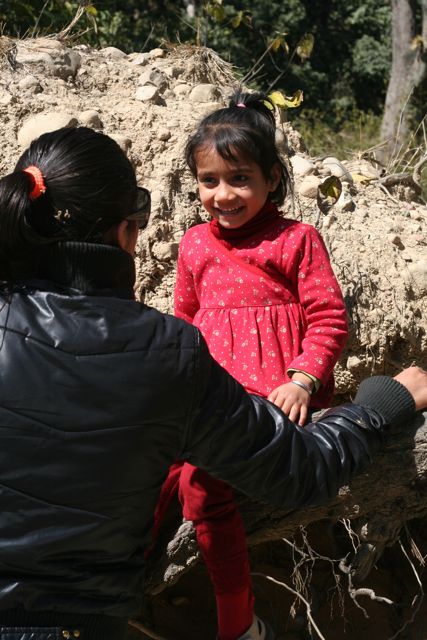 and then being shown how she would have to walk up the rough, rocky path . . . 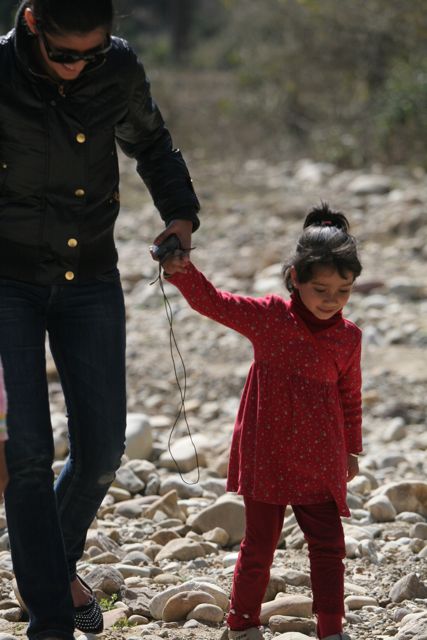 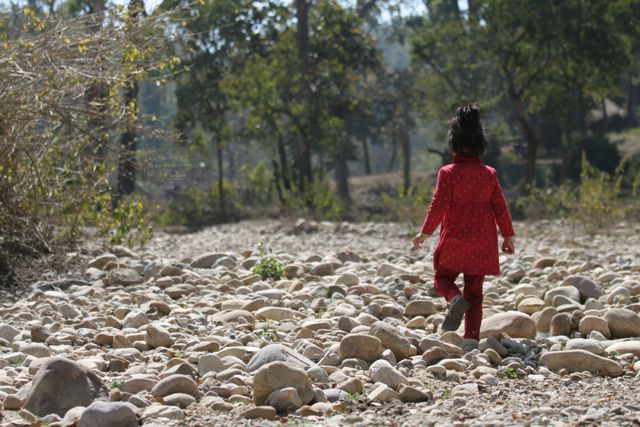 Manju and I were also there, sweltering in the hot sun (me still wearing the green sweater from the day before because it had been cool in the evening) and all wired for sound: 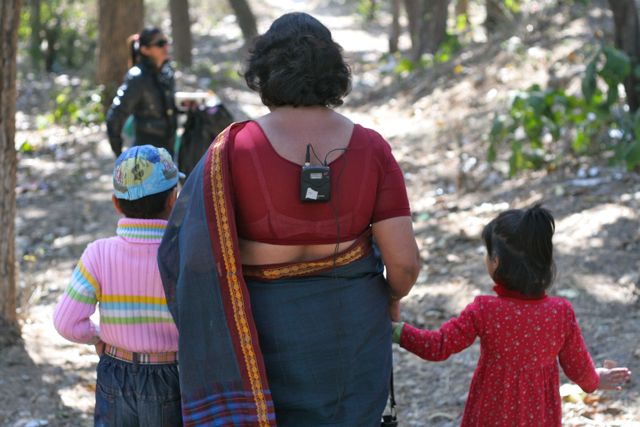 Our sound bites were filmed there (over and over and over – there is a pattern, right?) in the bright white light until Reena was satisfied and we were finally allowed to go home.

Day Three! Finally, we got to the real stuff: the work of the Foundation.

As usual, our kids hammed it up: 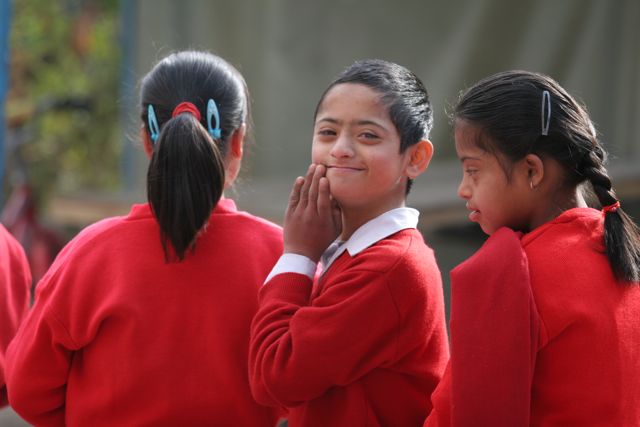 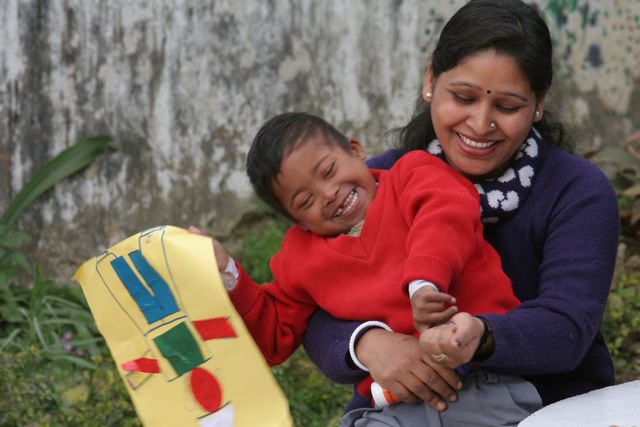 And as usual, Reena and the crew made them go through their usual routines (coming through the gate, saying the morning prayer, singing the National Anthem) over and over and over. 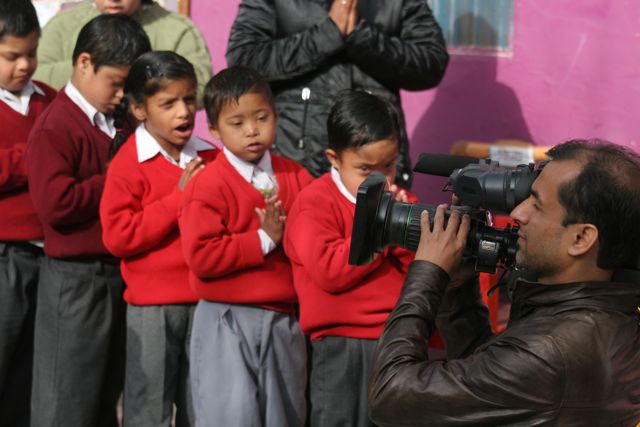 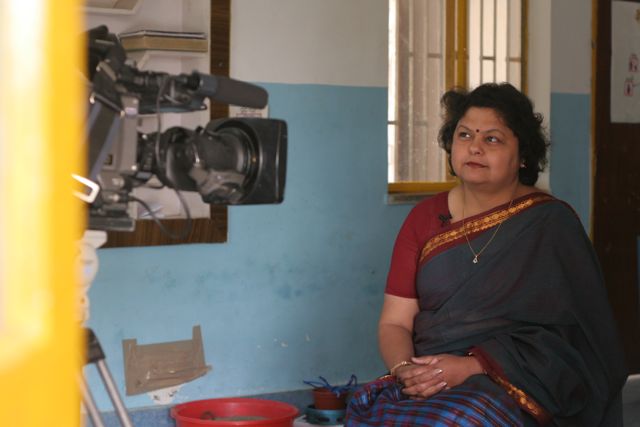 And then Reena got another idea and the whole crew piled into and on top of their vehicle for some action shots of a father bringing his daughter to school by bicycle: 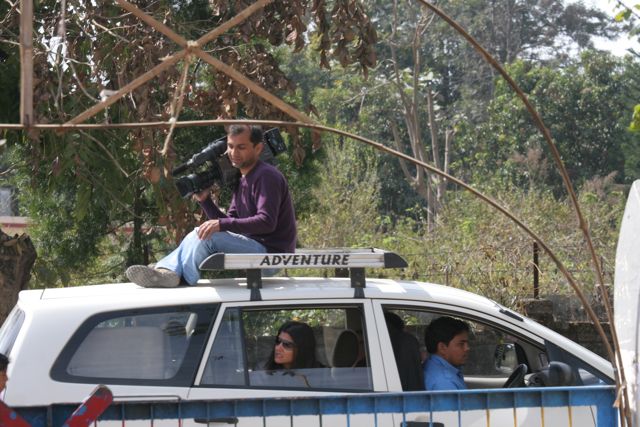 Looking at the two-minute film that was finally produced, you would never guess all that had gone into it.

Nor, looking at us in real life and knowing our casual, unscripted, down-home style, would you ever imagine we could look so glamourous and poised (we do, right?) on stage: 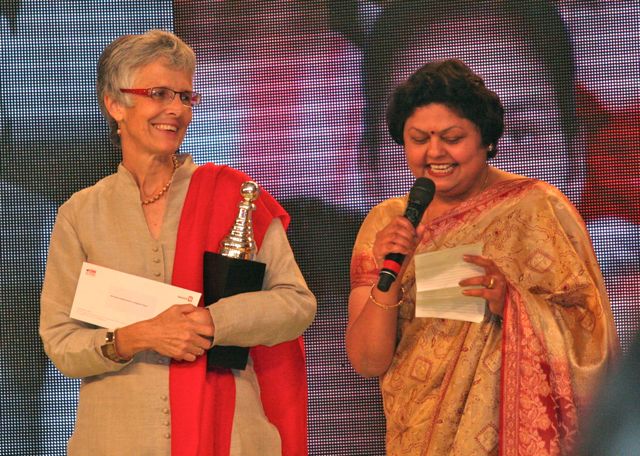 But there we are. Miracles do happen. The Latika Roy Foundation. A CNN IBN Real Hero. Thanks be to God, thanks be to Vandana Malik, Reena Bhardwaj and the CNN team, thanks be to all of you – our dear friends and supporters – for making it happen. 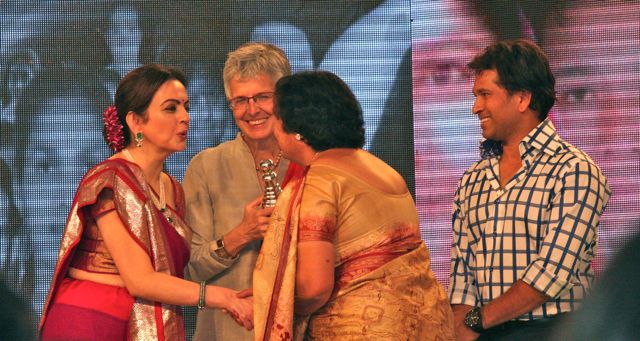