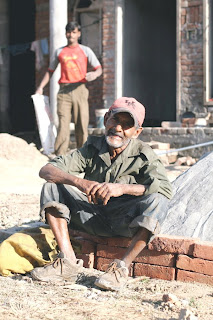 I have “known” this man for the past 20 years, but it is only in the past 18 months or so I have truly become aware of him.

He is a shepherd in our neighborhood and one meets him, literally, everywhere. He roams in and out of the small lanes and pockets that dot the area, keeping track of his animals. At night I have met him sometimes as late as nine, still searching for that one lost beast, not able to eat dinner or sleep until he has found it.

He is a tiny man – maybe a little over 4’10” –  because of curvature of the spine. He walks all bent over, carrying a stick and wearing the same clothes, day in, day out. He’s been a fixture in our lives, but I have never spoken to him until recently, because I always assumed he was deaf.

Now I can’t even recall what made me move past my assumption, but one day instead of just passing him by with a smile and a friendly nod, I stopped to try out a little sign language I had learned from Nirmala and some of the other special educators.

He just looked at me quizzically.

Then I made the A-OK sign, looking quizzically at HIM.

Then every day for the next few weeks whenever he saw me he would smile broadly and do the same sign back to me, often laughing at the same time.

Then one day I happened to have my camera when he was sitting resting at a building site. I motioned to ask if I could take his photo and he smiled beatifically which I took to be a yes. A few days later, I got a print made and the next time I saw him I gave it to him.

He was thrilled, and he told me so. The words were garbled and impossible to understand, but he was clearly speaking to communicate.

I asked him if he could hear and he nodded, then pointed to his mouth and made signs to indicate that the problem was there.

That night I met him after nine, he was very agitated and upset. He pointed at the moon, gestured the number three, took my wrist and pointed to my watch and made motions that seemed to be for milking a cow. Had he been searching for three hours and still hadn’t found the cow? He tried to speak as well, but I couldn’t understand him.

We parted in some frustration, but mixed, on my part, with elation and chagrin. It’s exciting to think about getting to know this man who definitely has a lot to say, but dismaying to think of how many years I have been excluding him from my life and my world.