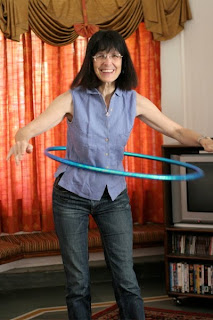 Everybody hula-hooped as kids, right? And we were all so good at it, right? Like flawless?

I decided hula hoops would be a great thing to introduce at Latika Vihar, but I thought I’d better get back in practice myself first. So I went to the toy store in Dehradun to buy one. To my dismay, all they had to offer was one that came in six pieces and had to be assembled! Not only that, it was very small.  Counter-intuitively, the bigger it is, the easier it is to keep up. I tried to find one when I was next in Delhi, but they too had only the dismantle-able kind.

Not to be defeated by details, I started practicing with the tiny thing but didn’t get very far. It really was small.

A few weeks into my project I had to interrupt it to go to Bangalore and then Chennai where I visited with my old friend Shaila Shivdas. While there we happened to visit a book/toy store which had PROPER HULA HOOPS for sale! I was tempted to buy several, but decided to settle for one because I was a bit worried about how I would get it back on the plane. 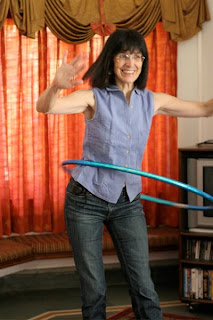 Shaila, who had once worked for an airline, said they would probably make me check it in, but I was determined to try my luck at getting it accepted as a carry-on.

At the airport, I checked one bag and the woman at the counter said “What about . . . THAT?” pointing doubtfully.

“I’m going to carry it on,” I said confidently.

“Oh I think they will. But I’ll come back if they don’t.”

Of course, I wasn’t so sure at all. But bravado is key when confronting rules.

I moved off toward the security line. Right away I could see what the problem was going to be. There was no way the hula hoop was going to fit through the x-ray machine. As I was standing there, the security woman glared at me. 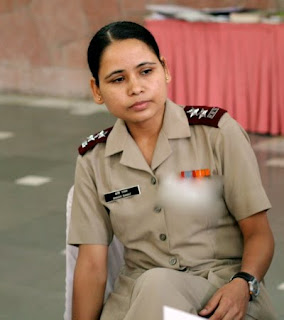 “That won’t fit through the machine,” she said flatly.

She stood up, laughing. “You speak HINDI?”

“What IS that thing?”

“She speaks Hindi,” she called over her shoulder to the other security people, who by now had gathered in a small crowd to gape at me.

“Mai aapko dekadoon?” (Shall I show you?) 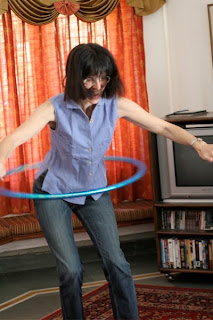 With that, I dropped my bags and demonstrated a few spins. She was highly amused.

So off we went to meet her supervisor.

“Yeh kya cheez hai?” he asked, clearly unimpressed. (“What the heck is this?”)

By now, the whole security squad was on my side, like a gang of long-lost cousins. They ushered me through, still laughing and exclaiming about the unlikeliness of a videshi like me speaking such excellent Hindi (hey, I’m writing this. I can say what I want.)

I had just gone through to the other side and was repacking my laptop and putting on my shoes when another security guard came breathlessly up to the gate. My champion said apologetically “He missed the show. Can you do it again?”

So once more, this time for the admiring throngs on the other side of security as well, but by now I was losing steam: 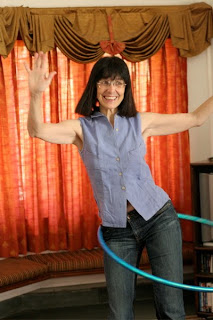 And I lost the hoop as well: 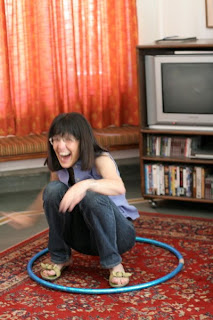 But by now everyone was so cheerful and supportive there was nothing but delight: 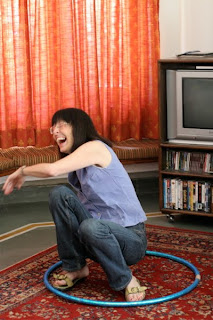 The hoop made it home safely and will soon be introduced at Latika Vihar. Watch this space for more fun and diversion.