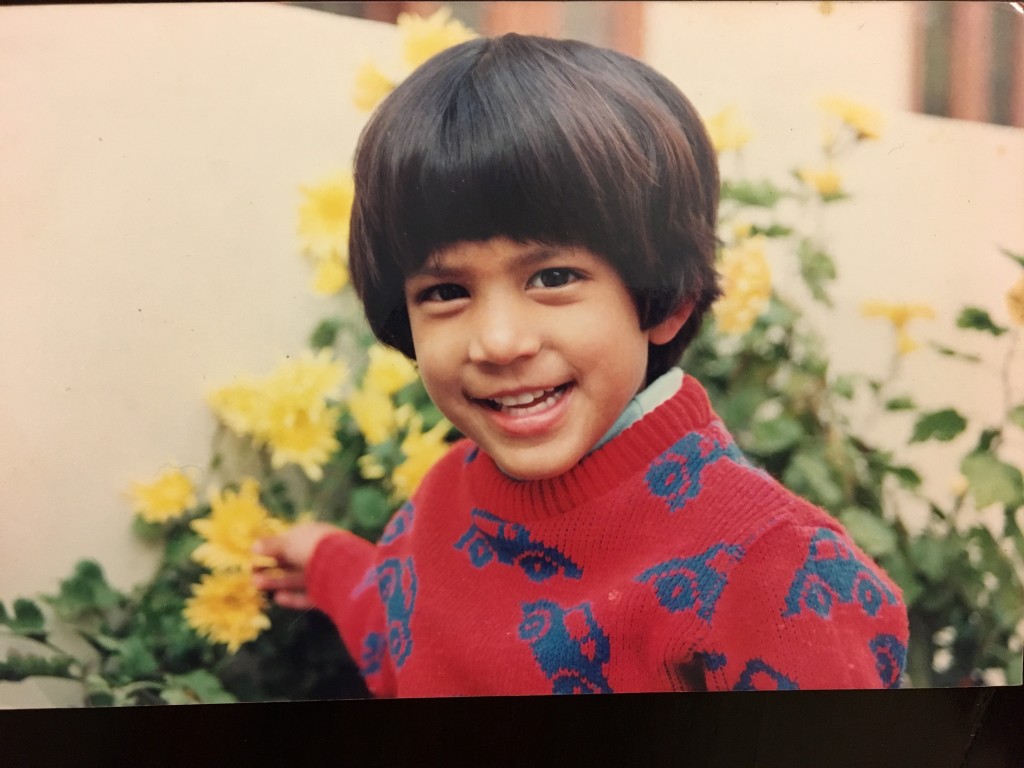 Mindfulness haunts us these days. We can’t stop thinking about Moy Moy. Often, we think so much we forget that she is gone.

Yesterday, Ravi and I were about to go for our morning walk. He said “Let’s go quickly so we can get back before Moy wakes up.” We thought it or said it every day while she was alive and we felt almost like teenagers sneaking out while she was still asleep. Sarita and Vikram were upstairs so she wasn’t alone, but it still felt daring and reckless.

Now every street we walk down carries something of that memory – that stolen time which she permeated even then by her absence. We were walking without her but we were always conscious of her not being there.

She slept with us and we always pushed a heavy chair up against her side of the bed to protect her from falling.  A few nights ago, I pushed that chair halfway across the room before I remembered that she no longer needs our protection, that where she is now she is in no danger of falling out of bed.

It’s a kind of mindfulness.

She occupies my mind now, in ways she didn’t when she was here. I get to work on time now every day and every day when I walk through the gate, every day when I see other people hurrying to be on time – I think of her. Punctuality wasn’t possible when she was here, not just because I had to get her ready every morning but because I was always so tired. I didn’t realize until it was no longer happening but I never had an unbroken night of sleep. Over years, it took its toll.

Her not-presence permeates everything. I’m in a meeting and suddenly there she is. She’s just gazing at me, no demands, no concerns – she’s just looking. We sit down to dinner and automatically reach out for the wheelchair that isn’t there. Its non-existence feels more real than the chair did when we would pull it close to the table so that she could be a part of the circle.

Her presence is everywhere and nowhere. The house is full of reminders, but her side of the bed is empty. There’s no towel on her rack in the bathroom. Her shoes, that I had scrubbed clean, lean up against the wall where I put them to dry weeks ago and her stroller sits idly on the verandah. We gave all her unopened medicines back to the pharmacist, but the little funnel we used for the tube and the small cups we put those meds in stand by the sink where they always lived. I still have a huge collection of hard-to-get 60 ml syringes that we used to floosh the tube clean after each feed. They were so precious when she was alive I’m not sure who to give them to now that she no longer needs them.

That tube of hers went with her to her grave. I don’t know why I keep thinking about that, but in some strange way it makes me feel jealous. It’s still with her.

In America, there are professionals who handle everything. The undertaker (what a vivid word!) comes and carts the dead body away in a stately black hearse, designed just for this purpose. A few days later, you go to a funeral parlour and meet the body again. It is now lying in an expensive and ornate coffin and is usually unrecognizable. The hair has been done in an unfamiliar way and the face is caked with make-up.

In India, we do everything ourselves. I wasn’t here when Moy Moy died (that’s a different story) and by the time Cathleen, Anand and I arrived 36 hours later, she had been bathed, dressed and was lying in a refrigerated coffin in our living room. Neighbours and friends came in and out and the women who had helped us care for her for so many years sat in vigil. They had been with her body since she died.

The stunning enormity of what happened hits me at different times and in different ways. When this picture was taken, I was intent only on the heroic effort of lifting our daughter into the simple wooden coffin she would be buried in. What I was actually doing didn’t really strike me. I was doing it, but there was no mindfulness. When I saw the photo weeks later, it was as if it were only just happening at that very moment. I was in my office, going through the hundreds of pictures Manik had taken. I put my head down on my desk and wept. It was as if we had only just lost Moy Moy that day. 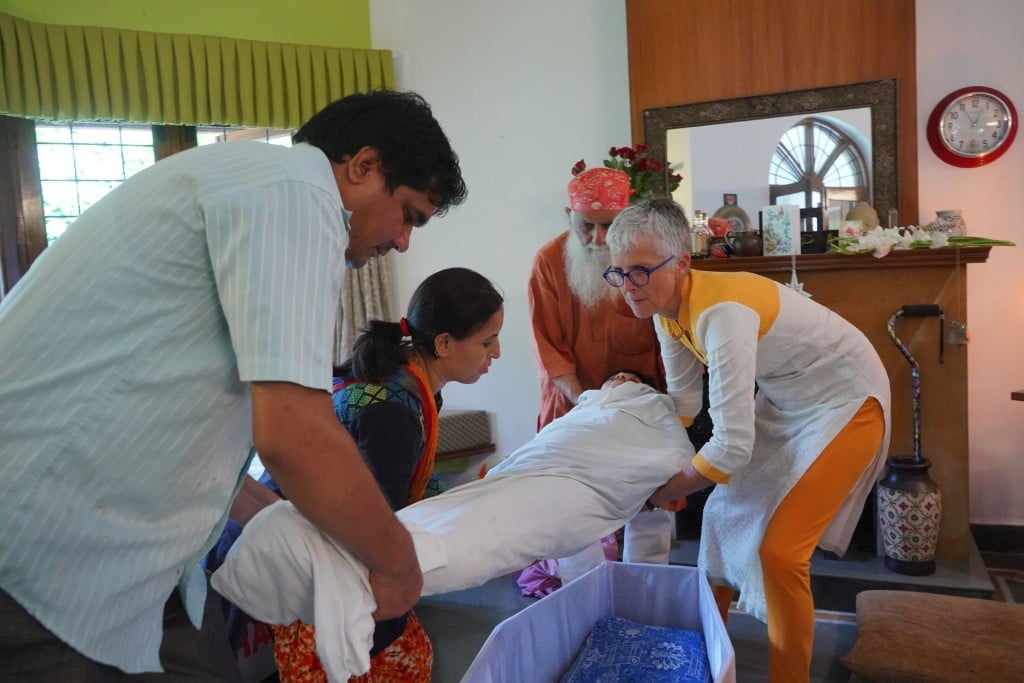 We lose her again every day. This sadness is so large it hides itself in everything we do and everywhere we go. We go through it over and over again – opening a cupboard, a letter, a door. Turning down a certain street, noticing a certain slant of light, leafing through a certain book. No action is safe, no moment is protected. It can come at any time and it will stay as long as it wants. We are riding this wave of grief and mindfulness seems to be the only way through.

Watch it. Experience it. Accept it.

She is ours. She is gone. She will always be with us. 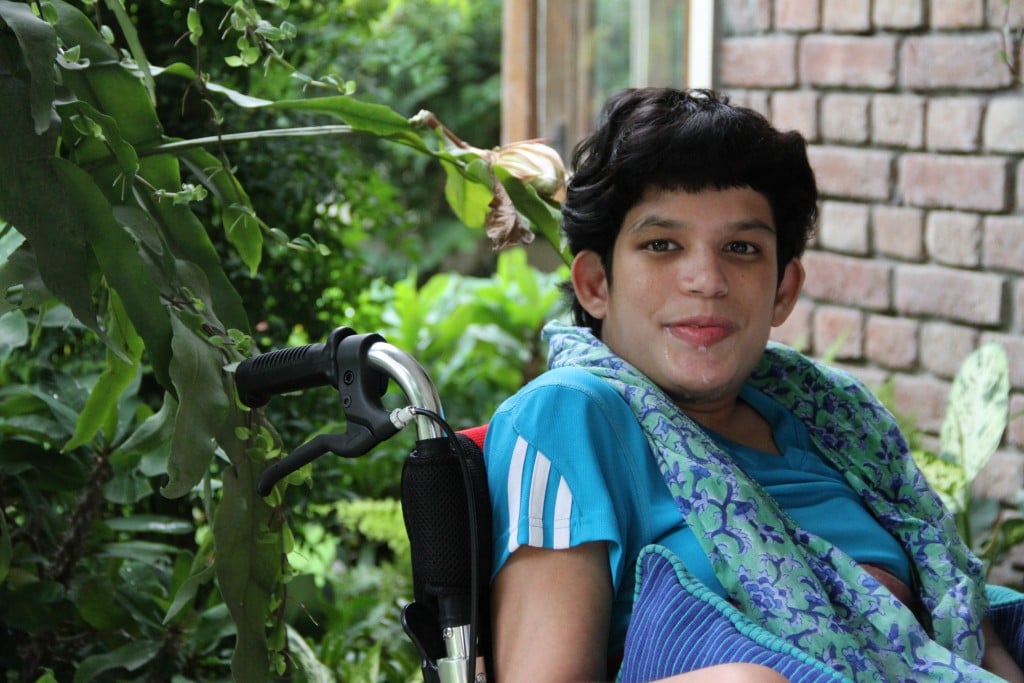