December 4th, 1989 was that day for us. Moy Moy arrived in our family through a series of strange, impulsive coincidences only God could have orchestrated.

Here’s how it happened.

Moy Moy was her mother’s 13th child. She had been sterilized after her 12th baby, but the operation didn’t quite work. Moy Moy was conceived anyway. Her Mom then decided on an abortion, but the only doctor she trusted was also the only doctor in our city who didn’t do abortions. She didn’t believe in it. So no abortion.

The doctor told her she would help her find a home for her baby and the Mom returned to her village for the duration. A few months later, coming down to Dehradun for a routine prenatal appointment, she went into labor on the bus. The bus pulled over and Moy Moy was born on the side of the road. She was 12 weeks premature and she weighed only one kilo.

I met Moy Moy’s mother many months later. She told me herself that she was tempted to just leave the baby right there on the side of the road. Get back on the bus as if nothing had happened. “I never thought she would survive,” she told me. “She was too small.”

But another woman who had gotten off the bus to help her convinced her not to. She insisted on wrapping the little scrap of a baby up in a shawl and taking her in to the hospital where that doctor who had promised to help was waiting. I try to imagine this part of the story but I never get very far. Moy Moy’s mother had just given birth. Somehow she climbs back on to an Indian bus (not comfortable, cold, a rough bumpy ride) and travels in to the city. She gets off at the hospital, holding the tiny baby in her arms. She’s aching and leaking and feeling bruised and empty. She finds the doctor and hands over the baby (our Moy Moy!).

My sister Mary and her husband were both medical students in the United States and we had arranged for them to do their infectious diseases rotation in a hospital in our city. Right. That hospital.

On their very first day, over lunch, the doctor tells them – just casually! conversation over lunch! – about the baby who has been left in the nursery and who needs a home. “Oh!” Mary says (impulsive!): “My sister will adopt her!”

That evening, when they come home, Mary tells me about the baby (actually, she jumped out of the auto-rickshaw and ran down the driveway – so excited to tell me). “Do you want to adopt her?”

The next day, I went in to the hospital with Mary and Tom. I met the doctor and I told her we wanted to take the baby. “Oh,” she said. “That’s wonderful. What does Ravi think?”

Her face changed. “Jo,” she said gently. “I know you American women are very liberated. But you can’t take a baby without asking your husband. She’s not going anywhere. Wait until Ravi comes home. Talk to him. Then decide.”

Ravi came home two days later. I told him the story and he advised caution. “Let’s meet her parents.” he said. “Let’s make sure they really want to give her away.”

Why did this advice not move me? Her parents had left her in a hospital. It was two weeks on and no one had come to reclaim her. I told him I was going to the hospital to talk with the doctor. “Don’t bring her home today,” he said. “Let’s first talk with her parents.”

I went to the hospital. I told the doctor there that Ravi had agreed. Knowing what he had actually said, I had some small doubts as I gazed on this tiny baby, lying there in her cold metal crib. But then I thought: “What difference does it make? If the parents want her back, we’ll give her back. If they don’t, we will keep her. Why should she stay even one day longer in a hospital? If she is to be our daughter, why should we leave her here with strangers, parked in a nurses’ station?””

I picked her up and put her down again, still considering. Then impulse took over. I wrapped her up tightly  in the little quilt I had brought and walked out into the night.

We didn’t have a car. I had to flag an auto rickshaw to take us home. Five minutes later, it suddenly occurred to me: these breasts which had sustained Anand and Cathleen were now blanks. I had nothing. I needed bottles and formula. We stopped at Kumar Stores for supplies. Holding this baby who was now, astonishingly, my daughter, I bought Lactogen, bottles, a scrubbing brush.

And then we got back into the rickshaw and we drove home. Ravi opened the door and said “I knew you would do this.”

I walked in to our house knowing I had done what I was destined to do. Ten minutes later, my friend Nicky arrived with Mary and Tom and and Anand and Cathleen. She brought clothes, a cradle, confidence.

Moy Moy, our little scrap of a daughter, nestled in. Anand and Cathleen played their big brother, big sister roles to perfection. 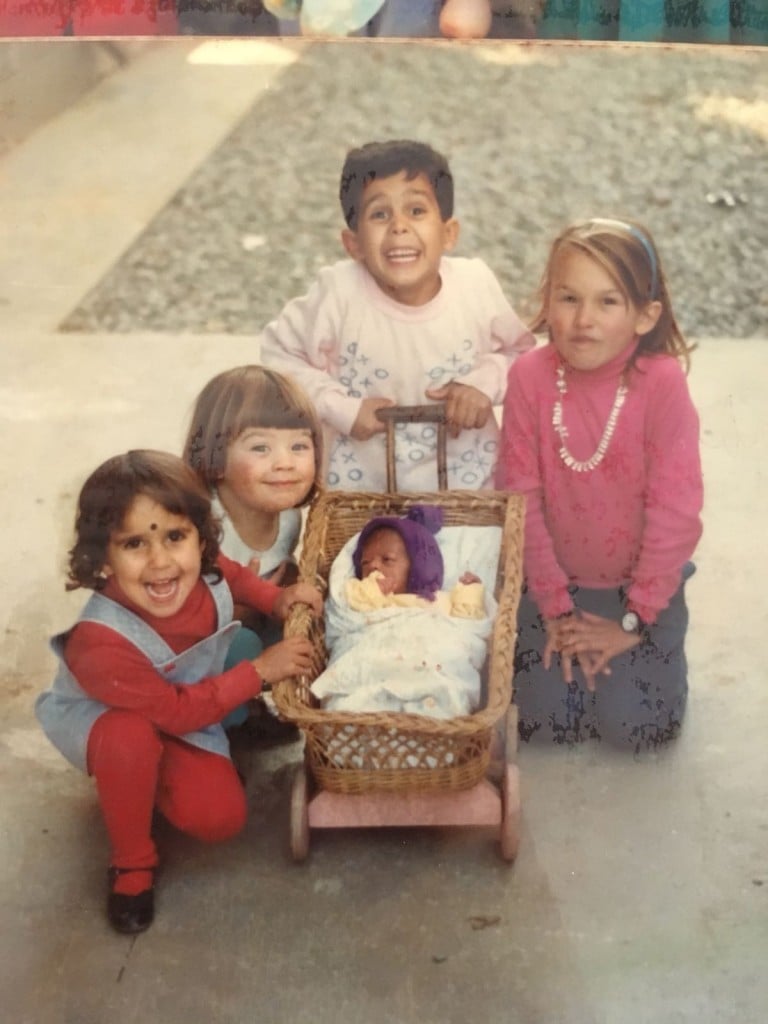 And everything else just fell straight into place. A school for Moy Moy. A Foundation. A New World.

Don’t think too much.

A baby needs a home. She’s tiny. May be disabled. May be about to change the world.

That’s the one for us.

Ceiling Fans and Tarun Tejpal
Now you have my blessing, go your way . . .
English
हिंदी