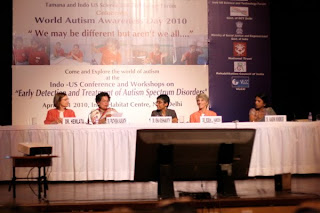 Last week I attended a conference on Autism in Delhi. It was a remarkable gathering of some of the best-known researchers and practitioners in the world and the presentations were – almost without exception – of a very high order. I learned so much about how to recognize autism spectrum disorders, ways to work with children who have it and the potential these children have, especially with early and skilled intervention.

It was a pleasure to listen to the different speakers, each so expert in her (they were almost all women) field, each so articulate and persuasive about the importance of starting early and working intensively with children to help them develop their full potential. More than anything else, theirs was a message of hope, of belief in the power of children to change for the good and to develop the ability to communicate.

Yet, there was something which made me uneasy about it. Maybe it was the fact that it was funded by the Indo-US Science and Technology Forum, a government to government enterprise whose mandate seems to be to increase Indo-US business ventures. Maybe it was the “disclosure” in one of the speaker’s presentations that she was co-author of a book on the methods being presented in the conference from which she received royalties. Maybe it was another speaker’s suggestion that organisations in India should apply for funding to get some of them to come here and train our people.

Some of those experts have developed beautiful new tools and approaches to working with our kids which are tested and found to be almost miraculously effective in helping children to communicate both through speech and non-verbally, to manage their emotions and deal with their sensory processing problems. But those tools and approaches are copyrighted and very expensive. You have to be trained to use them and training is also very expensive.

I know the professionals who spoke at the conference are caring, committed people who want to do their best for children with intellectual disabilities. But I also know that Autism is big business and that India is a big market. And sometimes, when we weigh what’s best for children against standards and copyrights and the cost of testing and research, the waters get murky.

My friends Vibha Krishnamurthy and Anjali Joshi put it all in perspective with their presentations which detailed the realities we work with here in India: the enormous numbers of children, the lack of trained professionals and the inability most organisations have to pay for the expensive new approaches.

I know research isn’t free and that people work very hard to develop the amazing methods which, years later, we all just take for granted. But I also know that having a disability is already unfair enough without adding not being able to afford the best therapy to the mix.

So I’m interested in a little piracy, a little guerilla action, a little heist wherein, with some diversionary tactics and some well-planned strategy, we grab the knowledge and run . . .