When our daughter died in India, I was in America. When our daughter died. It’s been six months and I still can’t quite believe it. I still haven’t fully grasped what has happened to us. I am still tiptoeing through my life, avoiding minefields, craters and flash fires. Tidal waves. Gale force winds. Undertows and sudden assaults from behind. Moy Moy has died. She is gone. 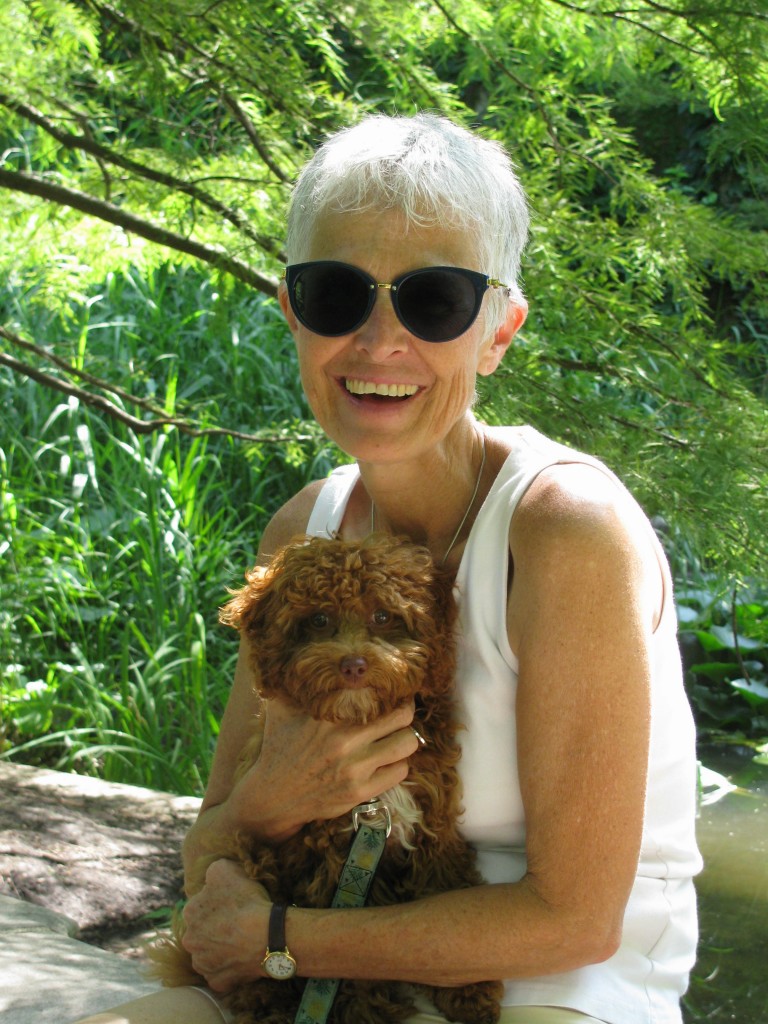 I was with our daughter Cathleen in Chicago. We had a whole day planned, though, for the life of me, I cannot remember one thing we were going to do.

At the time, in any case, it didn’t matter what we did. We were together and that meant pure happiness. Cathleen had recently acquired a puppy named Charlotte and we had gone for a walk on campus. It was a beautiful day and she took a picture of me holding the dog and sitting on a little bridge over a pond full of turtles and goldfish.

How little we know at any given moment.

That photo is a record of the last moment of my innocence.

Half an hour later, my entire world changed.    Suddenly, without preparation or warning, I became a mother plunged into an ocean of grief.  I would never – I will never – be the same.

I look at this picture over and over, longing to return to the moment it captures, believing somehow that if only I could change some tiny little thing, if only one small element could be different, Ravi wouldn’t have called, we would have finished our coffee, we would have carried on with our plan for the day (what was our plan?).

Half an hour after that photo, we were having coffee at an outdoor cafe on the University of Chicago campus. Ravi called as we were sitting there, under a tree, enjoying the moment. I smiled at Cathleen as I answered the phone. “It’s Baba,” I said. He sounded upbeat and relaxed. “Just calling to give you the final bulletin of the night,” he said.

It was 10:30 PM in India. Moy Moy had been a little under the weather for the past few days. Nothing serious, but with Moy Moy we were always hyper-vigilant. A little cold could become pneumonia in a flash. And when I was away, Ravi was on even more high alert. He didn’t like medical issues and he always erred on the side of caution. He had been in regular touch with Vibha and Ajay – our two developmental paediatrician friends who, conveniently, lived in two different time zones – and he had persuaded me to have a local doctor make a house call.

I had arranged it a bit reluctantly. I knew Ravi tended to panic and I was convinced that Moy was fine. But I wasn’t there and he was. He was in the room. So I called a friend and asked him to drop by. That doctor sent me a message at 4 that afternoon. Moy Moy was OK. He wasn’t worried about anything, but just to be sure, and to reassure Ravi, he had ordered a few tests. They would be done the next morning.

So when Ravi’s call came in, I had smiled at Cathleen and said “It’s Baba,” because I knew he would be calling about Moy. And I also knew that everything was fine. And so it was.

“She’s so much better!” he said. His voice was jubilant. “She’s sleeping peacefully. Her breathing is fine and she seems totally relaxed. Listen,” he said. “I’m going to bring the phone to her. You can hear for yourself how calm she is.”

By now, in Chicago, at the outdoor restaurant, I had stepped away from Cathleen and Charlotte to a quieter spot out on the lawns. On the phone, I followed Ravi’s footsteps walking to our bedroom where Moy Moy was sleeping. There was a rustling as he put the phone close to her head. Then a sudden flurry. “Jo Jo! I think she’s gone.”

Shock. Disbelief. Absolute rejection of the very idea. Of course he had to be mistaken. And yet, there it was. We were together on the phone, in real time (what else is time but real?) when we understood that our darling, beloved, adorable Moy Moy was gone. Gone.

“Ravi!” I said, desperate. “Do something! Shake her. Call Vikram! It can’t be happening!”

He hung up then to “do something” and I stumbled back to Cathleen. She took one look at me and rushed to hold me up. “Mom!” she said. “What is it?”

In that instant, the world rearranged itself. Quietly and emphatically, roles were reversed. Cathleen called Anand. The two of them stepped forward and took over.

We can’t bring Moy Moy back. But the legacy she created – in spite of her vulnerability and fragile need for care herself – lives on. Moy Moy was a force for more good than we can account for. There is no explanation for the joy she gave birth to or the love she inspired.

I will never forgive myself for not being there when she passed away.  I will always be grateful that I was with Ravi on the phone at the very moment it happened, that at least one of my other children was with me when I got the news. I always knew she would die before me. And I was still unprepared and shocked when it actually happened. I am the luckiest person in the world and I cannot believe how unfortunate I am.

Darling Moy Moy. Thank you for every little thing,