Story One: Three days ago, walking to my office after lunch, I watched as a car careened around a traffic island in our quiet residential neighborhood. It was going so fast it seemed to be poised on only two of its four wheels. As it sped past me, I saw that the car was full of high school students. The girl in front caught my eye and giggled. The boy driving waved arrogantly.

Seeing how stunned I was must have amused them for they repeated their performance three times – swerving around bicyclists, children returning from school and sedate elderly people just trying to get home in one piece – each time shouting uproariously at me as they passed.

They gave me plenty of time to note their license number and as they roared off into the distance, I sent a text message to the Deputy Inspector General of Police, whom I happen to know: “Hi Sanjay. I want to report a case of extremely reckless driving in Vasant Vihar. License plate UK 07 8073. At least 5 high school students in a very fancy white car. If you could follow up on it, it would send a powerful – and much needed – message to the youth of Dehradun.”

Sanjay responded immediately, saying that the Traffic Superintendent would be in touch with me soon. Two minutes later, the Superintendent called to inform me that the police were on the move. Unfortunately, the kids had an accident before the police caught up with them. They crashed the car and all of them fled the scene on foot, leaving it where it was and the Superintendent called me again the next day to inform me that they had impounded the vehicle and were grilling both the students and their parents.

Story Two: More serious, perhaps, depending on how you look at things.

A friend learned that a family in her neighborhood had employed a child as a domestic servant. The girl was only 12 and the family insisted that they were caring for her as they would for one of their own children – sending her to school and transferring regular sums to her family back in Assam.

Except that she was clearly not in school, no one ever saw her leave the house and no other domestic worker was employed there. Hmmm. This was not a family that was known for washing its own dishes or cooking its own food. SOMEONE was doing it.

That someone was a child.

My friend spoke directly with the woman of the house. she implored her to re-think, to consider this child in the same way as she considered her own child. When that didn’t work, she spoke to the neighborhood society. When that got her nowhere, she went to the District Magistrate. Then to Child Line.

Once again, I called my friend in the police department. Once again, in minutes, I got a call from the Sub-Inspector in the child’s neighborhood. The system began to grind its gears. Other friends stepped in to support the child.  The police moved in. The family told lies. My friend was called to explain herself.

It’s not perfect. Wealthy people know how to work the system.

But so do we. And the difference is that we have Truth on our side. We have the quest for justice. We have the Moral High Ground.

No. Not any more. We can do this. Not only CAN we, we must. Because the whole thing has spiraled so far out of control no one can remember what sense and reason look like. It’s up to us to remind people.

We are Citizens and we are our own Cops. Someone’s got to take control. Might as well be us. 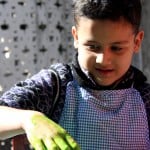