I’m not a sporty person. I prefer watching the out doors from an inside window. I was a bookworm as a child and going to the library was my favorite activity. I like swimming because you can lie down to do it and you don’t work up a sweat.

So when my sister suddenly got VIP tickets to the Boston Marathon last year, the one and only reason I agreed to go with her was because her husband was running and I thought it would be fun to see him lope in over the finish line. I thought it would be even more fun to watch her watching him.

But the reality was different. My Goodness, what a thrill it was to be there! The excitement was contagious, even for non-sporty me. What were all these people doing? Running down a street! Nothing more than that, yet there we all were cheering them on. Go! Go! Go!!!!!

They had all worked so hard, trained so long. They were ready, they were primed, they had only the finish line in mind. 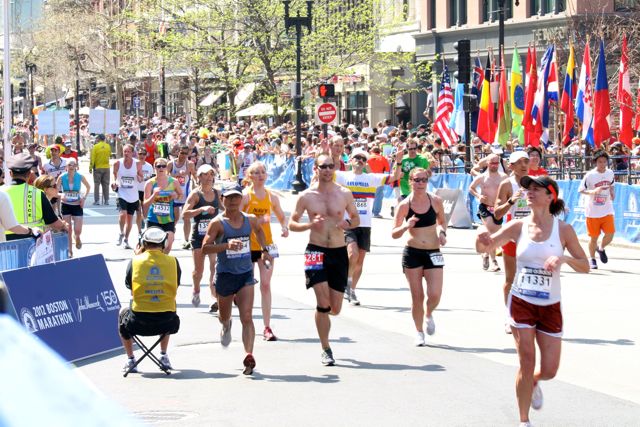 And suddenly, seeing them, I was swept into another world myself – a world of passion and drive and unbelievable fortitude: you had to see these people. You had to be there to understand the commitment, the josh, the joy they took in the run itself. It was overwhelming and amazing. It was inspiring.

So I’m angry today that terrorists took this moment and tried to sabotage it. I’m angry that they took the finish line of what was for some people a lifetime of devotion and resolve and then tried to squash and pummel it into something ugly and painful and small.

Because it was never that.

But I am also angry at my own country. Because my grief over what happened at the Boston Marathon is complicated and diminished and cheapened by what America has done around the world to people no less devoted, no less determined, no less resolved.

Drone attacks on little children. Explosives set off at weddings. Car bombs in Afghanistan. We think we have reasons, justifications, but in fact, we are no different from the terrorists who set a pressure cooker full of nails and shrapnel near the finish line of the Boston Marathon. In the eyes of the parents who lost children, the friends who lost friends, the children who lost parents, what possible difference do our strategies and rationalizations make?

Living outside of America, I don’t have the luxury of mourning the people who were killed and injured in Boston two days back. I was at the Boston Marathon one year ago, at the exact place and the exact time this year’s events took place, but much as I want to, I cannot give in to my desire to weep and to be angry. I am too aware of America’s role in similar tragedies in Afghanistan, Iran and Yemini.

I feel cheated. Honesty compels me to point out the obvious, but my real desire is to lie down on my bed and sob into a pillow. I can’t do that because I know how many children my country has orphaned, how many parents are bereaved because of us, how many hopes we have shattered, how many lives we have destroyed.

I want to sit down and weep over what happened to my country at the Boston Marathon. But I am too busy trying to make sense of what my country is doing to the rest of the world.