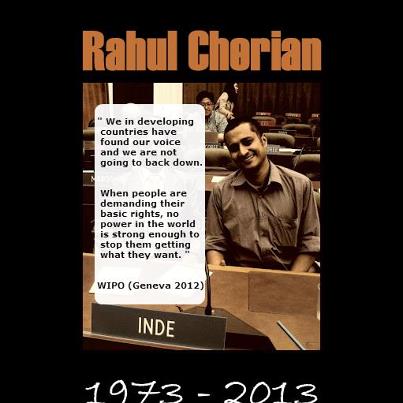 I first encountered Rahul Cherian as a quiet voice of reason in the midst of a vitriolic e-mail battle during the deliberations on the new disability bill being debated at the time here in India. Tempers were running high, accusations were being hurled and there was definitely more heat than light. Email chains ran in the hundreds, reputations were in shreds and it took courage and nerve to wade in and venture an opinion.

Rahul didn’t hesitate. Respectfully, calmly, with humor and authority, he would bring a lawyer’s mind to the questions being debated. I came to look forward to hearing what he had to say on whatever was the topic of the day, always sure that it would be something with sense, intelligence and compassion.

One day, after making a timid comment of my own, I got a call from Rahul. It felt like destiny. I had gone in to my office on a holiday just to pick up some papers I had forgotten and the phone rang.

Imagine my surprise to find that it was Rahul Cherian on the line. THE Rahul Cherian. He had liked what I’d said and sensed the existence of a kindred spirit.

We became email friends. I knew nothing more about him than his work. I didn’t know he had a disability himself. I didn’t know about his family, his education or his life. All I knew was that he was passionately committed to using the law as a tool for social change. All I knew was that he worked tirelessly (and often thanklessly – he told me, just weeks before he died, that he had lost track of the number of donors who had turned Inclusive Planet’s funding requests down, saying its work was too nebulous, too hard to quantify) to advance the cause of people with disability.

He made connections constantly: access to civil aviation by physically impaired people, early intervention in Kerala, the rights of people with disability to use the internet, public libraries and people with special needs – he was a force of nature. He simply never stopped. He wrote briefs, shared information, gathered opinions and broke laws down so that lay people could understand them. He was a walking, talking resource centre.

And now he is gone. Rahul passed away this morning in Goa – where he had gone with his family for a brief holiday – from septicemia. His death is a body blow to the disability movement in India, a terrible loss to all of us who believe as he did in the rights of people with disability to information, education, access and justice.

All we can do now is to honor his memory by continuing the work he was so passionately committed to. As the tributes continue to pour in, let’s remember that all he would have wanted is for his work to be completed. Let’s carry it on.

Rahul: we will remember. We will build that Inclusive Planet you dreamed of. We are still here. Let that be your legacy.