One of the reasons I take photos is for the freeze frame. There is so much going on at any given moment it’s impossible to take it all in, even more impossible to do any of it justice, let alone honor. 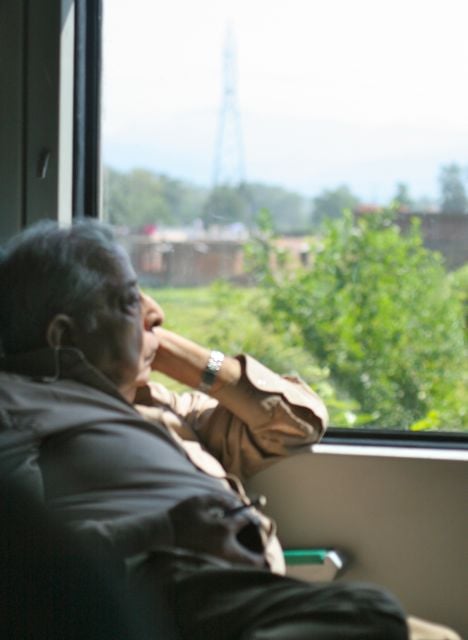 Photography reminds me of the hidden depths, the secret lives, the mysteries and the complexities all our lives contain but which, rushing to buy the milk, catch the bus, tweet the news, we sometimes overlook (especially in others! Our own hidden depths we usually stay in touch with.).

This man sat behind me on the train most of the way on the train from Delhi to Dehradun the other day. I barely noticed him. I heard him  conversing with his wife occasionally and I listened in on his phone call to the hotel in Mussoorie where they were heading. He wanted to know if there would be parking available if he hired a car in Dehradun. Nothing special, nothing memorable.

In Haridwar, the compartment emptied out. With an hour still to go, his wife stretched out for a nap and he moved across the aisle. The woman next to me had gotten off too, so I sat cross-legged, my back to the window and my laptop on the other seat. Every now and then, I glanced up to take in the view.

And in a flash, in one of those glances, I took in the man. I don’t claim any profound insight. I didn’t gaze into his soul, I had no access to his thoughts or feelings, I got no sense of what he might have been contemplating or even if he was contemplating at all.

All I did was take him in. I recognized him as a human being, as a person like me with an inner life, with hopes and regrets and secret dreams. It was only a moment, but it changed the way I saw him. He came alive.

He didn’t seem to notice.

A few minutes later, his wife woke up and he crossed the aisle to join her. He caught my eye while making the shift, this man who had not so much as glanced at me the whole journey, and asked shyly if I was going to Mussoorie. I told him no, that I lived in Dehradun.

He looked disappointed. “I just thought we might give you a lift,” he said, smiling.

Maybe the atmosphere changed when I regarded him; maybe he would have reached out to me anyway. There’s no way to tell. But I think we are so practiced at keeping each other at bay, so accustomed to not engaging, not seeing, not connecting, that when the walls do go down, even for a tiny instant, even for that startling one moment it takes for it to suddenly click that this person is – OMG! – a person, the change is palpable. It’s like a breeze or a fragrance. Like a hand raised in greeting on a train full of strangers. Out of nowhere.

I was sorry not to be going to Mussoorie. But I’ve got the photo. Next time we meet, I’ll recognize him right away.

Latika Roy Foundation Named NGO of the Year!
Dasra – How I Got There In The First Place
English
हिंदी