When Manoj died, we all gathered – quickly for some, hours later for others – at the hospital. The long, slow process of the post-mortem and the release of the body would take its time. It moved relatively quickly for us because of a friend in a high place, but even with his help, the process took time.

Just as well. It is not easy – it is almost impossible – to comprehend quickly the ending of a life. Especially a young life, a life full of promise and possibility, a life which had just passed itself on in the person of a tiny daughter – just five weeks old when her father died.

So for once, we welcomed bureaucracy. For once we found the slow grinding of its wheels acceptable and even appropriate. This was one process we didn’t want to rush.

Yet when his mother and his aunts and his sisters and – most painfully – his young wife – arrived, we quailed. Their grief was so wild, so out-of-control, so visceral. It was frightening.

And also scripted. It was clear to me that each woman mourning was acting a part. Not to say their grief wasn’t real, but just that it had to play out in a certain way to be counted.

In the Bible – our Holy Book – people in mourning, especially women, are said to “rend their garments.” That’s what happened that day in the hospital for Manoj. His mother, his aunts, his young wife – they wailed and flung themselves about and tore at their kurtas. They writhed on the floor of the hospital corridors. And, oblivious to anything or anyone, they left their mark on others. 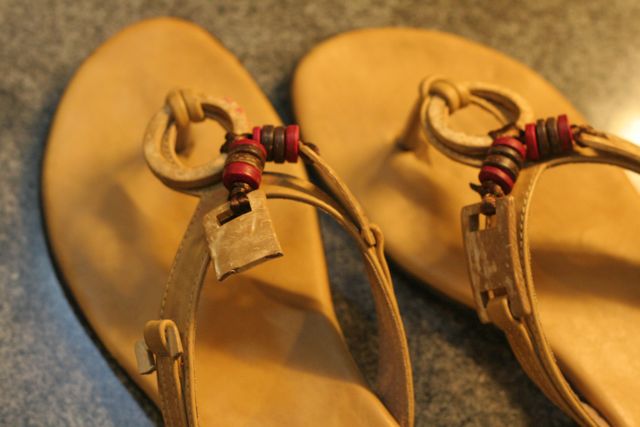 Somewhere in the confusion (Oh! Those women flung themselves about so wildly, so carelessly. They had no idea whose feet they were stomping on; whose chunnis they were tearing to shreds), one of my sandals (brand new) was broken.

That little broken tag has become an emblem for me of the grief and the loss: I can still wear that sandal. It still protects my foot. But the decorative bit flaps helplessly and sadly – reminding me forever of the truth of the loss: he is gone.

Manoj is gone forever. A life snuffed out through another’s carelessness; a life that can never be restored, never be returned. His daughter will grow up without him, his wife will soldier on.

But there is also a larger truth: “Though much is taken, much remains.” And that is also true. And we hold on to it tenaciously and fervently. Manoj is gone. But Rakhi and Simran are still here. His memory, his legacy, remain.

Simran, his daughter’s name, means “the memory of God.” Part of remembering God – and this is the part we don’t like – is accepting that we are not in control, that we are in His Hands, that there is a larger plan we may not always be able to see.

Growing Babies; Balanced Diets
The Size Of What We See
English
हिंदी