Reluctant as I am to tell another beauty parlor story, I do have to share this one. Mainly because I don’t know what I think until I see what I say. And I want to understand this.

So there I was yesterday, getting my first trim, post Justine. I had returned to my old faithful parlor in Delhi and it had been like old home week when I entered. All the guys – the ones who do the pedicures – stopped what they were doing to come and say hello. The lady who does the shampoos hugged me. The woman who does my manicures was in tears. The woman who cuts my hair was thrilled I had stopped dyeing. Everyone wanted to know where Cathleen was.

I was sitting there being ministered to, with the milk of human kindness by the quart in every vein, when suddenly a young woman strode in. She was talking loudly on the phone and she was furious, sarcastic, bitter, tearful and brutal by turns.

“Oh, so you can meet me for coffee, can you? And am I supposed to be overjoyed? Should I buy a necklace to celebrate?” She had now reached the chair where she was supposed to sit down. “Wipe the chair,” she hissed to the first guy she laid eyes on. “With a CLEAN towel, do you mind? Now bring another one and do it again.” Then she was back to her harangue. “I don’t need this. I’m close to a breakdown. I cannot BELIEVE you can treat me like this.”

By now, the basin of water for her pedicure had arrived. First the water was too hot. Then it was too cold. When the guy brought the basket of nail polishes for her to choose from, she barked at him as I have never heard anyone bark before. “Gadha! (Donkey!) Not THAT one. I told you! Dark shades! Why are you bringing pastels?”

If I hadn’t been witnessing it with my own eyes and ears, I would simply not have believed anyone could be so rude and obnoxious (and I am sparing you 90% of what I experienced). But as outraged as I was on their behalf, it slowly became clear to me that the parlor staff was taking no notice whatsoever. With the exception of the young man showing her the nail polishes, who was new, no one was even slightly bothered by her display of rage, pique and self-centeredness.

It went on and on. She seemed to have no end to the invective, unhappiness and blame she could produce. Everything was wrong and it was all someone else’s fault. To the staff, however, she was no more than an irritating little fly droning on and on. They exchanged glances, smirked if she wasn’t looking and carried on as if nothing was amiss.

But the lovely feeling I had been bathed in before her arrival was gone. Perhaps no one was taking her venom personally, perhaps no one thought differently about themselves just because she had no use for them, perhaps no one cared two hoots for her demented and deranged take on life –  but her impact was still apparent. No one was happy, no one could relax, no one was enjoying their work anymore.

And when she finally departed, the relief was palpable.

So I was left thinking about boats. 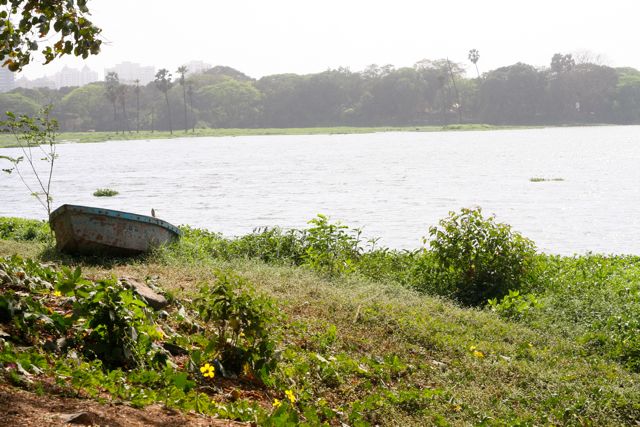 About metaphorical boats, meant to place unwanted cargo in, to be pushed out onto the lake of forgetting and forgiving.

But also about the little boat in the song I learned in childhood:

Happiness runs in a circular motion

Love is like a little boat upon the sea

Everyone is a part of everything anyway

You can be happy if you let yourself be.

We sang it in three-part rounds, complicated later by the addition of a nonsense line which nonetheless contained a profound truth:

Why, oh, why didn’t that woman know this? She goes around – even into a beauty parlor! – spreading unhappiness and misery and ends up only compounding it for herself.

It made me think of my own choices (for I believe what the song says: you can be happy if you let yourself be) and how perilously close I come at times to slipping into unhappiness, not realizing how selfish a choice it is, forgetting how it adds to others’ unhappiness, choosing to ignore the role I have to play in this world.

Everyone is a part of everything anyway.

I like the rueful tone of the anyway. Like: it doesn’t matter if you agree or not, it’s still true.

And as much as I wanted to put that woman on a boat (preferably a leaking one) and push her out on the lake, at another, better, level, I wanted to give her a hug and tell her to get a grip: You are doing all this to yourself.