This one is for Natasha, who sent me such a lovely film clip this morning and who makes me smile at least three times every day, even though we have never met. Thanks, Natasha! 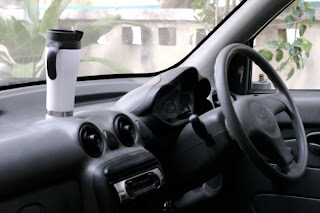 Indians don’t generally drive and drink coffee at the same time. They look at me as if I am a little pathetic when I do. “Poor thing,” they seem to be saying to themselves. “Doesn’t have enough time to relax.”

I actually don’t do it very often – mainly because the roads here are so challenging you need all your wits about you while navigating them. But yesterday I had a meeting across town and I wanted to be on time and yes, I had no time to relax over breakfast. I dug out the one travel cup we possess, washed it thoroughly (hadn’t used it in six months), filled it up with my signature latte and drove very carefully out the driveway and onto the road.

So there I was, not drinking my coffee because I was too busy weaving in and out, dodging the cycles and the bullock carts and doing pretty well until I got totally stuck behind a huge police truck, too wide to pass. It was open at the back and it was packed with young cops. They looked as young cops so often do: dull, bored, vacant. They were staring out at me, but it didn’t seem like they saw me at all.

I was stuck, but I was listening to a great Josh Ritter song called “Bright Eyes,” so I was feeling pretty cheerful and a little reckless. Suddenly I remembered my coffee. I reached out for my cup – still nice and hot, but just before taking a sip I happened to glance up at the cops. Same dull vacant stares, looking at nothing in particular.

I caught one’s eye and gave him a big smile and raised the cup as in a toast. Transformation. Have you ever seen that happen? A whole crowd of stolid, serious men . . . 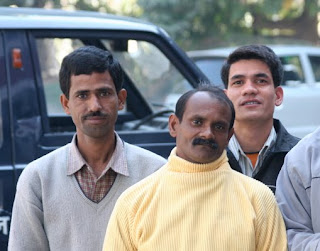 whose hearts seem to suddenly and visibly lift? Smiles appeared across every face in unison . . . 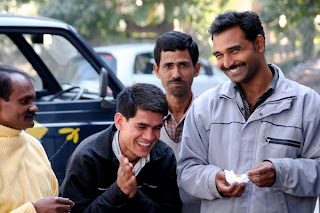 and they nodded and cheered me on as a space appeared on the right and I was able to pass their slow-moving truck.

(And no, these aren’t those policemen. Do you think I wanted to get arrested for drinking coffee, listening to music AND taking photos while driving? But you get the picture. . . such a small gesture, such a lovely connection, my day made.)