I used to think of design as being about frills: the fun, the beautiful, the quirky little extras you only have time for when the basics have been covered. But working with people with disability has made me realize that design is so much more than fancy flourishes. It’s also about how things work best, about applying thought to the things people do every day and making it easier, more graceful, and, even, in some cases, possible.

I live in a family of newspaper-holics. We subscribe to eight different papers and Ravi and Mummy can’t function until they’ve read their favorites each morning. I read The Hindu at work and The Times at home, and I don’t mind waiting my turn till Mummy is through with it. 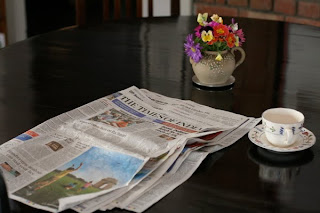 Except that by the time I get my hands on it, it’s a mangled mess. 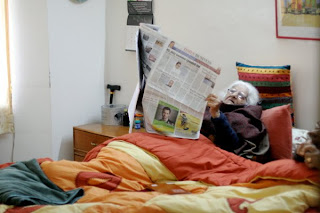 And I really can’t blame her. She reads it in bed, her arms are short and she has arthritis so it’s painful to turn the pages. For many years, I have just straightened it out as best I could and carried on (aren’t I brave!).

Then, on a recent trip to Bangalore, I was waiting in a shop for a LONG time. To amuse myself, I picked up a newspaper the management kept available for other similarly bored customers. It was evening, and one would have thought the paper would be wrinkled and in tatters by then. But in fact it was as neat as it had just been delivered. As a connoisseur of pristine newspapers, I was intrigued. How did they manage it? 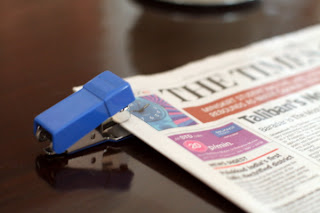 Design. Using the simple and elegant tool of staples and imagination in a preventive strike, some very clever person in Bangalore had solved the messy newspaper problem. I brought the solution home and was greeted with universal acclaim (well – almost: Ravi thinks it’s a waste of staples).
Mummy loves it the most, which made me realize that for her, the messy paper was not only unpleasant to read but, considerate soul that she is, unpleasant to hand over to me.