Deaf people have it hard in India. Although Sign is a recognized language and an effective way for the deaf to communicate, the accepted wisdom here is that they should just learn how to speak. So what if they can’t hear; so what if what they say is unintelligible to the average listener. Just talk already!

In many Indian schools for the deaf, signing is actually banned (the same way Hindi is banned in many English medium schools); it’s not surprising, then, that sign language interpretation is limited as a profession, governed by the same antiquated and patronising mind-set that bans the language itself.

At a disability conference in Bangalore recently, I met many deaf people. Most of them had run-of-the-mill sign interpreters. One had a pro.

For me, it was a revelation.

Vaibhav Kothari is a super smart man. But when I walked in to the first session of the conference – which he happened to be chairing – for the first ten minutes I didn’t even notice him. A man wearing a collar mike, seated in the audience, was speaking and naturally, my gaze turned to him. He was sitting erect and he spoke with authority. From what I recall, he said: “We’re going to break into small groups now, but first I want you to turn to the person on your left and introduce yourself. Each one of you tell the other a funny incident from your school days – something you still remember because it made you think or feel or see things differently.”

After this activity, when we had all come back to the larger group because the guy with the collar mike told us to, I suddenly realized that collar mike guy was not actually running the show. He wasn’t speaking for himself. I’m still not sure what clued me in, but it was something about his eye contact (he wasn’t looking at the audience, but off in the distance, towards another guy seated on what I now could see was a low dais).

OMG. The guy on the dais was in charge. Vaibhav is deaf and he was signing from across the room. Collar mike guy was watching him and speaking his thoughts out loud. This was interpretation like I have never experienced in India. This was interpretation with the interpreter totally removed from the equation. Collar mike guy was simply the conduit, the voice which gave existence to the deaf guy’s language.

By the nature of their role, interpreters have power. Whether it’s from one spoken language to another (Hindi to English, say) or from a gestural one like sign, eye pointing, art, dance or music to a spoken form – the interpreter can be true to the speaker or distorting.

I’ve witnessed distortions. Sometimes an interpreter may feel what the speaker is saying is inappropriate or not well expressed. They may then tone it down or repackage it so as not to offend the listener, make it more in line with their own opinions, or ratchet it up or down depending on their own vocabulary. This is unprofessional and fairly easy to spot.

It’s been more difficult to spot my own biases. Until I saw Collar Mike Guy in action, I hadn’t even realized that interpretation as I knew it was always in the 3rd person. “He’s saying he wants you to turn to the person on your left and introduce yourself.” was what I was used to.

When a person has an intellectual disability, even if they are capable of speaking, interpretation is the norm and most well-meaning support people tend to infantalize the person speaking. I’ve done this myself without even realizing it.

Fond laughter while relating what the person has said is common (the tone is “Isn’t he adorable?”) and even if that doesn’t happen, the interpreter almost always inserts themselves into the communication. I did this just the other day when introducing a visitor to one of the children at our school. 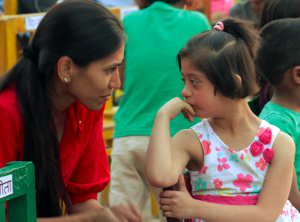 “This is Kashvi,” I said to the woman I was taking around, introducing her to one of our very expressive children who doesn’t use many spoken words. “She’s saying Namaste.” Hurtling on, without pause, I continued. “She wants you to look at her picture. And she’s wearing a new dress – she wants you to notice it.”

“Namaste, I’m Kashvi!” Pause while the other person responds.

“What do you think of my picture?” Pause for the other person to admire it.

“I got this new dress yesterday. Pink is my favorite color.” Pause while the other person comments.

My voice, her thoughts, spoken as if she is the one expressing them and as if she’s communicating, not watching her life being narrated. I’m not important here. This is Kashvi’s conversation. (And Collar Mike Guy’s name is Mateo. I owe him a lot.) 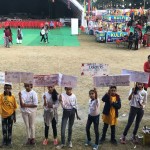 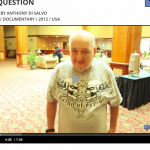 Films Can Change The Way You Think