I will never forget the day I bought this bowl. The moment I saw it, I knew it was going to be a family heirloom. I knew this was a bowl that would live on in my children’s memories as part of their early lives. 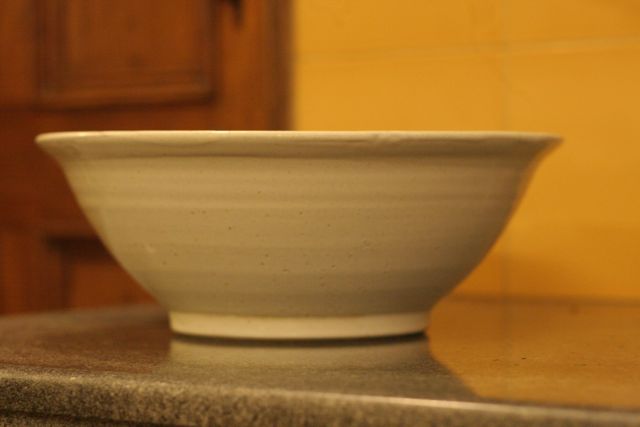 It would just be Mom’s bowl at first, but eventually it would come to symbolize much more. They would see it, on visits home in their 20s or 30s or 40s, and suddenly their childhoods would come rushing back: the homemade bread! the chocolate cakes! the cookies, the pies, the muffins, the scones, the quiches – a life spent in a happy family, with a Mom who loved to bake and who loved baking for her children.

At the time, we only had Anand and money was tight. I already had my oven, acquired miraculously, but I didn’t have a bowl.

Well, of course, I had a bowl. But it was plastic. Or maybe steel. I don’t recall. It was not the stuff of memories. It would not have had a place in the lives my children would create for themselves.

This one would. It had the heft and the weight of an heirloom. I could see that just looking at it.

It cost Rs 400. I remember it, because, oddly, that was the same amount I had spent on my oven, just a few months earlier. I also remember it because I spent that 400 rupees on a very memorable day – 3rd December, 1985.

3rd December, 1984 was, of course, the day that the city of Bhopal experienced what many consider to be the world’s worst industrial disaster. While estimates vary on the actual death toll, the official number is nearly 4000; the more believable one is 16,000 because that one included people who died over the weeks following the catastrophe . . . slow, painful, agonizing deaths the like of which none of us can imagine. And that doesn’t begin to take into account the thousands who continue to suffer – birth defects, cancers, painful, tortured lives.

But I bought my bowl in 1985. That was a full year after the disaster. No matter. I come from a family which remembers dates. I am married to a man who remembers disasters. 3rd December lives on in our minds.

There was day of remembrance in 1985. Anand was one year old. We were as poor as ever. There was a gathering in honor of the Bhopal victims in a hall in Bengali Market and right across the street – at Triveni – there was a crafts mela.

Anand and I rode in on a bus; Ravi was to join us when he could. He was late. We had some time to spare.  We went to the crafts mela and there I saw The Bowl.

I recognized it immediately as heirloom worthy. This was the one I would be able to pass down to children who didn’t even exist yet (the recipient – eventually – would have to be Cathleen. Anand would never be interested enough  in cooking. Moy Moy would always be cooked for.) I bought it.

When Anand and I met Ravi, he was mortified that we had been shopping pre-memorial.  I have to admit, it felt a bit disrespectful to me as well. And yet, at the same time, it felt right.

I had no plans to make anything crazy in this bowl. I was thinking about bread. I was thinking about an occasional cake, or maybe a salad. Yet Ravi felt bad and I felt guilty. In that uneasy situation, we attended the memorial and then went home. I put Anand to bed, dreaming about the bread I would make the next day. A white-grey bowl. A family treasure.

Now, 28 years later, I have made thousands of loaves of bread in that bowl. It is still with me – not yet handed down to the next generation.

But a few days ago, the unthinkable happened. While Sarita (our household helper) was washing it, a crazy thing: the tap fell off its mooring. It landed squarely on the rim of the bowl and broke its lip in two tiny pieces. 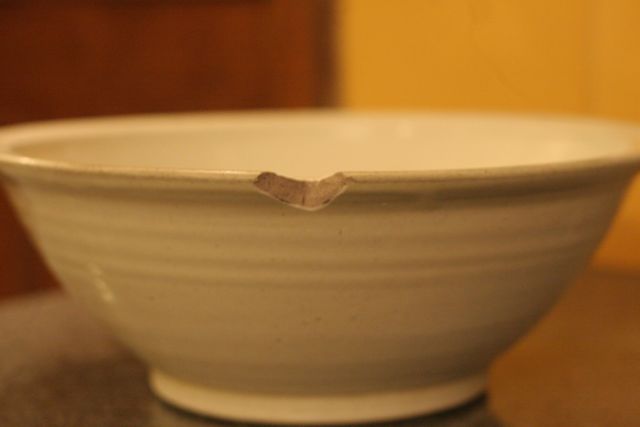 “No big deal!” I told her, as she, aghast, tried to fish the two pieces out of the drain. “Don’t worry about it!”

Somehow I knew, somehow I had always known, that this bowl was not meant to survive unscathed. 28 years on, its day of reckoning had finally arrived.

I krazy-glued it back together, but it’s a rough patchwork job. Pick it up from the wrong angle and it will break again, possibly shattering the entire bowl if the break surprises you and you let it slip from your hands to the hard stone floor. It’s got special needs now – this bowl – and it will need careful handling and a strong awareness of which side it can be picked up from.

I have always looked at this bowl with a mixture of gladness (it’s mine!) and regret (it reminds me of Bhopal). Now I look at my family heirloom with tenderness and regard, more aware than before of fragility and the precarious position we are in, as a planet, as people. I think now of our shared disrespect for life, for the terrible suffering an entire city still struggles with and for the collective responsibility we do not want to acknowledge.

I’m still using my bowl. I can’t put it in a showcase to safeguard it for the next generation – always to be looked at, never to be used. I make bread in it twice a week, cakes for birthdays and anniversaries, cookies for Vijay and Lakshi when the whim strikes. When I wash the bowl, I stroke the rim gently. I don’t scrub too hard. We have to move on. We have to remember.