Sometimes I wish I didn’t love our staff so much. Each and every person in the Foundation is so special, so wonderful – it’s almost unbelievable. They are cheerful and generous and funny and kind. They are the sort of people you would want your children to marry. They are keepers – every single one.

So when something bad happens to one of them, it hurts more than it is possible to describe. Today, we are all walking around in a daze, unable to comprehend the reality of what has taken place.

Manoj was hit by a reckless, speeding car on Friday night. He was walking; the car was on the wrong side of the road, traveling far over the speed limit. He suffered massive head injuries and has already had two operations to try and relieve the pressure inside his brain. His chances of survival are only 10%. 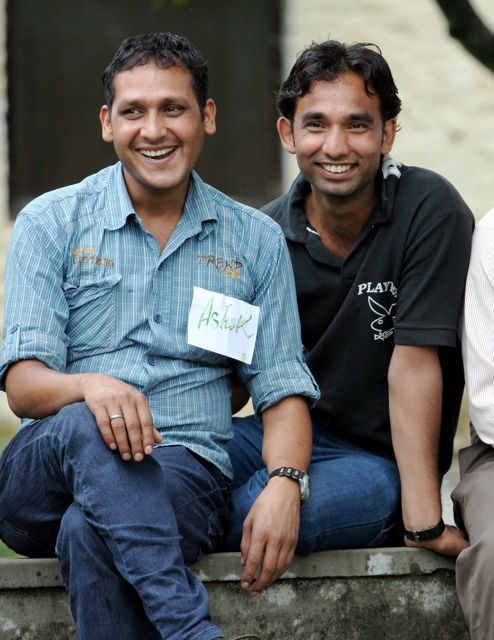 Here’s Manoj in happier times. He’s the one in black, looking just as we all still think of him: smiling, cheerful, relaxed – eager and ready to do whatever is necessary.

Manoj was in another accident about a year ago. He was a passenger in a car that time and his injuries left him with a limp and an arm that wouldn’t quite do what he wanted it to. After his recovery, he returned to work downcast and depressed. But with the encouragement of his friends in the Foundation and the constant efforts of our physiotherapists, he slowly regained his confidence and his strength. We were all so proud of his courage and his determination. Such bravery! He really deserved a medal.

I saw Manoj in the ICU today – his head swollen and misshapen, his body hooked up to various tubes. I held his hand and whispered to him about the many friends waiting out in the corridors; about the love and respect we all had for him; about his little baby daughter, not even two weeks old; about how much we all needed him to recover and return to us . . .

Recover, Manoj. Return to us. Your place is waiting. We are longing for your safe return.