Report in the Lancet shows that children across the globe will hit the same milestones, as long as basic needs are met

Indian children cool off on a hot day in Delhi. Photograph: Money Sharma/EPA

Healthy children develop in remarkably similar ways, no matter where they live, according to a study that confounds prevailing beliefs on childhood development.

A report published in the Lancet found that early developmental milestones in a large number of children aged from 0-3 years, in four diverse countries – Argentina, India, South Africa and Turkey – were similar.

The study’s authors said that by using a universal tool for measuring child development for the first time, they managed to overcome a key barrier to addressing analytical difficulties in low- and middle-income countries – that of obtaining reliable data.

Previous research, which has shown that children attain different milestones across sex and cultures, did not pay enough attention to children’s health and its impact on development, researchers said.

Dr Roopa Srinivasan, a developmental paediatrician based in Mumbai, India, said researchers there “have often felt pressured to use what scarce resources we have to develop, customise and re-standardise existing ‘gold standard’ tools for use in our own settings, without which we are not taken seriously by bureaucrats or politicians”.

The report, which studied thousands of healthy children, said: “Our study advances the understanding of early childhood development by showing that many milestones in numerous domains are similarly attained across sexes and countries. We found that the attainment of almost all milestones is similar in the first year when environmental and cultural influences might have the smallest effect.”

The lack of standardised instruments that are culturally appropriate, affordable and simple enough to be used by community health workers has meant that data on child development is scarce, the authors said. Furthermore, low- and middle-income countries have sometimes been reluctant to invest in early childhood initiatives whose logic may be questioned and whose effectiveness they may not be able to measure.

The research is part of a growing trend in low- and middle-income countries to focus on child development.

“With irrefutable evidence that children in low- and middle-income countries can be expected to develop optimally as long as basic needs for nutrition, safety and stimulation are met, policy makers and political leaders can now turn their attention to making it happen.”

This article first appeared in The Guardian. 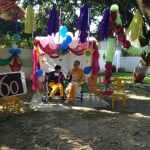