Last week, Vijay had his computer exam. He came to Mummy – as he does whenever he has a test – for coaching, but this time she told him to talk to me. “What do I know about computers?” she said. 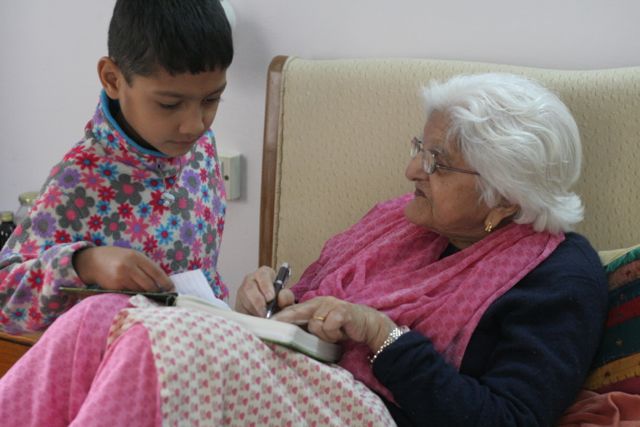 Vijay and I went out to the living room and, handing me his notebook of questions and answers, he asked me solemnly to quiz him.

“You’ve got it all down?” I said. “You know all about computers?”

Vijay’s eyes glazed over and he got an intense look of concentration on his face. “A CPU is the Central Processing Unit of a computer.” His voice rang out sing-song style, sounding very strange and un-Vijay-like. “The CPU is the hardware within a computer that carries out the instructions of a computer program by performing the basic arithmetical, logical, and input/output operations of the system.”

Wow, I thought to myself. I didn’t know that.

“Very good!” I said. What else could I say? He had it down to a word-for-word perfection. “What is a printer?”

Glazed look again. He drew a deep breath, then plunged in: “A printer is a machine which produces a representation of an electronic document on physical media such as paper or transparency film.”

I had to ask: “Vijay, have you ever seen a printer?”

Yet he still knew that a printer was a machine which produced a representation of an electronic document on physical media such as paper or transparency film.

For the last few weeks, Vijay and Lakshi have been playing with my laptop. I’ve introduced them to games (some educational; some just for fun) and I have watched their growing fascination/addiction with something like alarm : am I doing the right thing?

But back to the pre-test coaching session.

“Vijay,” I asked. “Shall we find out what a printer actually is?”

With a little help, Vijay found WORD on my laptop, opened it and sat down to compose a note to Lakshi. Carefully, painstakingly, he figured out how to do capital letters; how to leave a space between words, and how to scroll down to the next line:

Tomorrow I have a computer test.

Will you help me study?

“So how do you think we can do that? Can you find a way to send a message to the printer?”

I swear I would never have figured it out as quickly as he did. He scanned the computer screen and located an image of a printer. He clicked on it and the dialogue immediately came up. VIjay can read well enough to figure out the intricacies of that particular box.

“Now run to my bedroom,” I told him. “You’ll see the paper come out there.”

His excitement was palpable. He stood transfixed as the paper emerged, bearing his own words.

“That’s a printer.” I told him. “That’s what printing means.”

Over the next ten minutes he repeated this three times. Each time, in his excitement, he made the same tense mistake. Each time, he corrected himself.

Activity. Based. Learning. is MAGIC.

Never, in all my life, have I seen anything so amazing, so compelling, so convincing. We learn by doing.

We learn by doing.