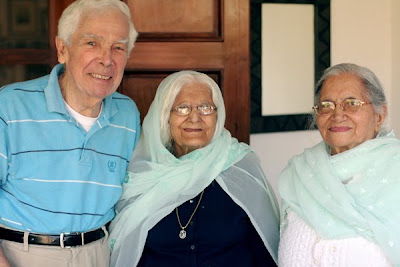 As much as I would like to believe I haven’t aged or changed or been in any way affected by the passing of years, in fact I am more than half a century along. My reactions are slower, my opinions are formed, and I feel, God help me, somewhat entitled.

But I am as nothing compared to the three worthies in the picture. They are, in order in the photo, 88, 93 and 83 (Dad, Mummy and Masiji) and they present a view of life which is fascinating, illuminating and instructive. And, since they all live with us, they affect our lives in ways one would never have imagined or predicted.

The conversation! Let’s take an average morning at the breakfast table. Dad and Mummy are both very hard of hearing, Dad speaks only English, Masiji speaks only Hindi, and Mummy, though fluent in English, prefers Hindi too. Ravi and I try to discuss things in whatever language works:

“No, Dad, I was saying our new awareness person is very competent.”

“Why are you shouting so much?”

Since none of them can tell reliably when we are speaking and, like young children, their own thoughts are far more important than anything we could be discussing, our conversations are invariably interrupted. We have become adept at responding to them and then returning to whatever it was we were talking about, but there are days when the connection grows tenuous.

Mummy will tell us, for example, in excruciating detail about some news she has received from Bombay – the story begins with the phone call she didn’t pick up because she assumed someone else would. Finally, three calls later, she realises that no one else in the house is able to answer (but this realisation requires a string of separate stories to explain everyone else’s non-availability: I was bathing Moy Moy late that day because she had slept in and was going to be late for college, Ravi was in Delhi attending the meeting he had been working on for the past few weeks, Padma was at the store because the sugar had run out, the sugar had run out because we had unexpected visitors and I had made a quick cake). By the time she finally gets to the part about answering the phone herself, we have absolutely no idea who was calling or what time zone we are living in.

All this means we seldom get a chance to actually have a real conversation. Yesterday, I had actually made an appointment with Ravi to get his ideas on some issues at work I was trying to sort out. Moy Moy was napping, Mummy was watching cricket and Dad was busy at his desk (Masiji has gone to Delhi for medical treatment). We were sitting on the front porch and we were just getting somewhere in the discussion when Dad appeared at the front door.

“I want you to know,” he said proudly, “that I DID take my pill.” Cheerfully, he went on to explain how he had found it on his own, gotten a glass of water himself and that if we wanted, we could inform his doctor too.

Why did that make me go blank? I don’t know. But after he left, I looked at Ravi and discovered that I was speechless. I couldn’t remember the rest of what I had wanted to say.

It seems to be happening rather frequently these days.

Brother and Sister
The World Is So Full of a Number of Things . . .
English
हिंदी