Mahi, age four, fell into an open borewell near Manesar on June 20th. 86 hours later, after protracted and heroic efforts by an Army rescue team, her body was pulled out and the child was declared dead.

I thought about Mahi yesterday watching the children splash in the little wading pool I got to make these hot summer days a bit bearable. 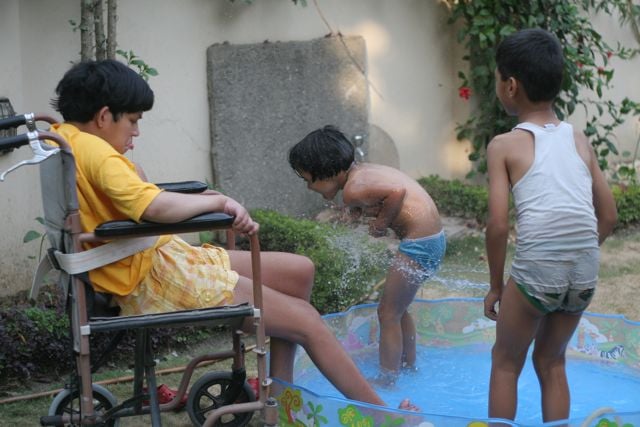 They adore the pool. If it were up to them, they’d do nothing else but play in it. They’ve got this game where they try out different objects – leaves, sticks, stones, string – to see what will float. There’s another where they run headlong from the far side of the garden and fling themselves into the water in a pretend dive. There’s no end to the games inventive children can come up with if water is involved.

That’s why the most important game we play is the last one: 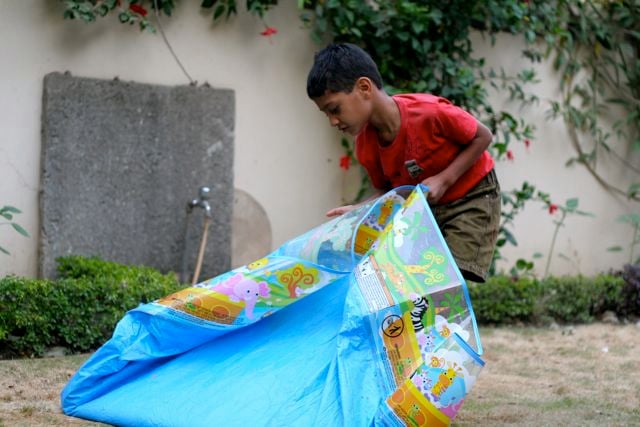 No matter how strict our rules are about not playing in the water unless an adult is present, children are children. Vijay, at seven, may be able to remember my orders. Mahi – sorry, Lakshi – at four, cannot.

In fact, the first day I set the thing up, after the children had played, dried themselves and changed their clothes, I sent them upstairs and took Moy Moy inside to change hers. Some sixth sense made me return to check two minutes later and there was Mahi (oh, damn, I mean Lakshi) back at the pool, fully dressed, still eager to play. 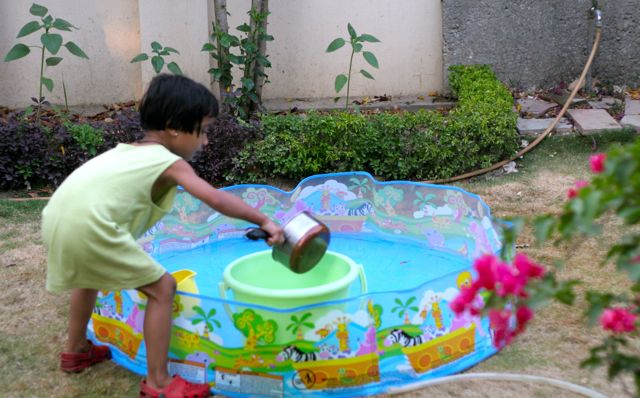 And yes, I did get angry. She knew the rule! I shouted at her as if it were her fault. As if being Mahi – err, Lakshi – was a sin. As if she should have known better. As if – at four -she could have.

My anger was really directed at myself. Because I knew Mahi’s safety was my responsibility.

Because I know that.

So new rule, new game: The pool session ends and the pool gets emptied. That moment. No waiting till I’ve done five or six other things. No saving the water till evening so I can use it more efficiently to water the garden. No leaving water in a pool with no adult supervising. Not even for a moment.

Because it takes an inch of water for a child to drown.

(My brother-in-law, on his first day at work as a new doctor, had a child arrive dead in his clinic. Three years old, he had wandered into a neighbor’s garden, tripped and fell face first into a wading pool. There was hardly any water in it – just enough for a little boy to die in.)

So we empty the pool as our last activity. Mahi is damn good at it: 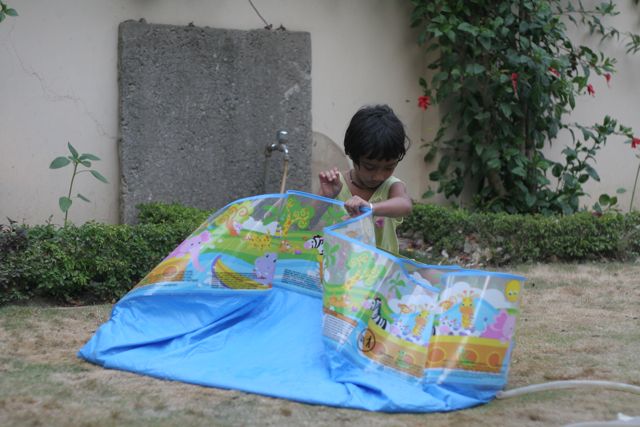 She and Vijay make it a game, watering the plants and swabbing the verandah, bailing water from the pool and pouring it busily onto everything dry in sight as if their lives depend upon it.

Damn it, how often do we need to have this conversation? How many times does a Lakshi or a Mahi need to fall into an open well or burn to death in a school or drown when a ferry sinks or eat rat poison or be hit by a speeding bus before we stop and think about safety, about precautions, about protecting our children?

Children are children. It is not their job to know about all the dangers that lurk around every corner, waiting to pounce. That’s our job. That’s why we are here.

I am sick to death of hand-wringing, finger-pointing and breast-beating. I am weary beyond words of “heroic protracted rescue efforts” which would have been entirely unnecessary (and which didn’t work anyway) if basic, simple precautions had been taken.

Some things are difficult, some things require creative solutions. This is not one of them.

This is not complicated.

Put the poison out of reach!

Bloody hell, do Mahis and Lakshis grow on trees?

A birth, a death, a picnic . . .
Living Inside The Mistake, Part 2
English
हिंदी