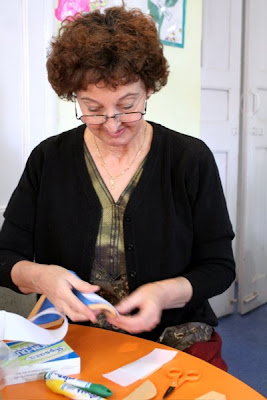 An important and ongoing activity of the EIC – making splints and other assistive devices – gained momentum this year through the quiet and dedicated efforts of one of our most faithful and talented volunteers – Barbara Angert, an Occupational Therapist presently based in Dehradun and a long-time supporter of the Foundation.

Barbara is an amazing person. Unbelievably skilled and experienced, she has a generosity of spirit which can only be explained by her faith in God and her belief in service to God’s people. I met her one very lucky day – seven years ago! – in Rama Market, of all places. Cathleen and I were shopping for cloth and there was this woman I had never seen before chatting to the shopkeeper in excellent Hindi. How could I not know her? Dehradun is a small place when you are a foreign woman who speaks Hindi. There are not that many of us.

So finally, I had to ask.

Barbara told me she was an Occupational Therapist and that she worked with kids with disability.

A few days later, she arrived at the EIC and the rest, as we say, is history.

Children attending The Early Intervention Center are often in the process of learning to walk. Because so many of them have Cerebral Palsy, when they try to stand, their brains send the wrong messages to their leg and ankle muscles – resulting in a range of painful and disabling conditions. Their ankles become weak, their foot arches might collapse or they end up in contorted and awkward positions. Although learning to walk is still possible even with these conditions, it is MUCH more difficult. And later in life, the deformities produced can cause pain and serious arthritis. 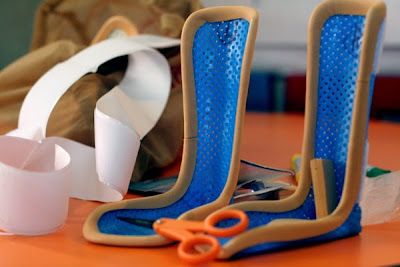 The answer? The marvelous science of orthotics. Braces and splints can be designed which hold the child’s feet and legs in the anatomically correct positions during the crucial learning-to-walk phase. Properly braced limbs make it possible for the child to concentrate on acquiring new skills of balance and righting because her brain doesn’t have to put so much energy into controlling muscles which have a mind of their own.

The Foundation, with Barbara’s skill and leadership, has bee 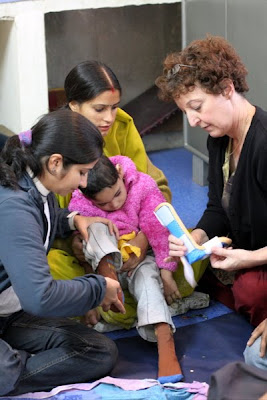 n able to provide a wide range of orthotic devices for many EIC children. In the past year, this department has expanded, with Barbara training our current crop of physiotherapists to make the splints themselves.

Orthotic devices are extremely expensive and often not carefully made here in Dehradun.

Our goal is to establish a full-fledged Orthotics unit to serve any child in Dehradun who needs it.

Because every child deserves the love and devotion that Barbara brings to her work.